Sheetal Gattani's solo opened at Chemould Prescott Road on February 2, marking the second anniversary of the gallery's move to its current location. Sheetal has for years painted watercolours on paper in a fashion that simulated oils, so her recent move to acrylics on canvas doesn't create a radically different look. That isn't a bad thing, since she's accomplished at producing thickly layered paintings that look like monochromatic blocks, cracked and speckled in places allowing the underlayers to shine through. 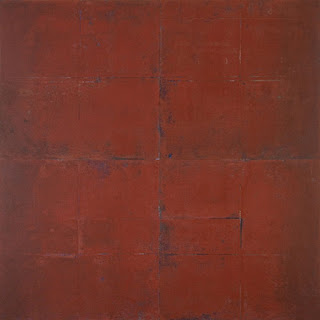 The big change in this series is her use of three dimensionality. The paintings are made up of segments, some of which are recessed in the mounting, creating a play of surface and depth, shadows and light. Sheetal works within a tradition of abstraction that has been unfashionable for a long time. But she has doggedly stuck with her vision, and her latest offering makes for a mature, substantial and satisfactory show.
To coincide with Sheetal's opening, Jitish Kallat exhibited a giant canvas with a giant name in Gallery Articulate downstairs. The painting, titled Horrorificabilitudinitatibus, is headed for London, where it will be part of a 40 person group show at Haunch of Venison's new space at 6, Burlington Gardens. The building formerly housed the British Museum's ethnographic collection and was called the Museum of Mankind. After a refurbishment in 1998, the ethnographic artefacts moved to back to the main British Museum, and 6, Burlington Gardens was taken over by the Royal Academy. Haunch of Venison have leased it for 3 years, agreeing to pay some 4.5 million pounds for it in a deal which may now seem a big mistake.
Horrorificabilitudinitatibus is a play on honorificabilitudinitatibus, which is the longest word with alternating consonants and vowels in the English language, and means 'the state of being able to achieve honours'. By changing 'honor' to 'horror' Jitish focuses on 'the state of being able to receive horrors', referring particularly to the fascination with which the spectacle of 26/11 was greeted. The artist gathered together news photographs of citizens staring up at the burning buildings of South Bombay, and crafted one composite image which he then transferred to canvas. The figures in the finished painting have coagulated cityscapes resting on their heads, a motif Jitish has used for the past two years, and seen in this picture from his Dawn Chorus series exhibited at London's Albion gallery in late 2007. 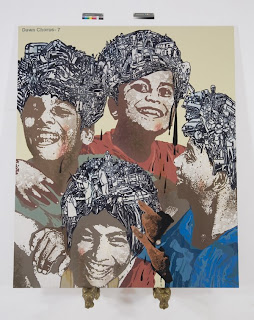 The striped 'rays of the sun' background he employs is also familiar from past work, particularly a sequence titled Carbon Milk he exhibited in Beijing in mid 2007. 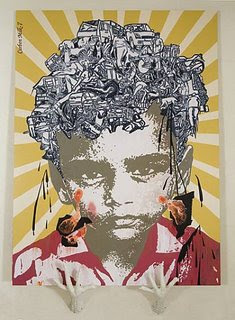 A few insect-like forms float down from the sky; they look like flayed body parts and are also supposed to be reminiscent of Rorschach inkblots. The picture surface is covered with glitter dust, perhaps meant to signify falling shards of glass. Unfortunately, the glitter, together with the stripey background, makes the painting look cluttered and a bit kitschy. I have a feeling a plain background of the sort Jitish used for his Albion show would have been more successful here. Perhaps the problem with the image is that the central group of figures is uninvolving and Jitish has overcompensated in trying to rectify the situation.
Aside from its formal shortcomings, the canvas is also hampered by its subject. To this day, no truly important work has been created about the 9/11 attacks, because there is no way art can compete with the astonishing images of the planes hitting the Trade Centres and the collapse of the towers. In similar vein, the terrorist strike on south Bombay made a tremendous visual impact on the public at large, being carried non-stop for three days on every news channel. That's something difficult to assimilate and respond to adequately by means of a painting. Jitish is intelligent enough to realise this, which is why he has focussed on the reception of the attack rather than the attack itself. But there's been a lot of attention paid to this aspect of the event as well, and Horrorificabilitudinitatibus has no new insight or perspective to offer on the matter.
Jitish is nothing if not confident, and, by making the painting in the exact dimensions of Picasso's Guernica, he advertises the scale of his ambition. There is a congruence of subject between the Kallat and the Picasso, of course, but the Guernica reference serves only to diminish Horrorificabilitudinitatibus further. It is never wise for artists to bring to mind comparisons where they are going to come out second best.
Jitish is one of my favourite artists, but Horrorificabilitudinitatibus feels like a mis-step. In general in recent years, his sculptural and photographic works have made a far greater impression on me than his paintings. I'd never have thought that possible, given his exceptional gifts as a painter.
Update, February 7: Jitish informed me that the glitter was always part of his plan for the painting and wasn't meant to represent anything specific.
Posted by Girish Shahane Girish Shahane at 9:46 PM

Let me Salute you first, Shoot or Mumble later.
Congratulations on an enterprise carried out with utter honesty; a commodity which is in short supply when it comes to discussions within the art-world.
I was thrilled to see your blog.

While I humbly accept your opinion on the formal construction of the picture, it may be useful to alert you about a few fundamental issues. No art is ever in competition with its subject; nor does an art historical reference symbolically alluded to by an artist ever becomes the rival of the work within which it is cited. That may be a very unproductive and dangerous way to look at the role of the ‘citation index’ within art or any other form of cerebral endeavour.

An art work either succeeds or fails; it can never be victorious as it is never caught in a contest.

Another fundamental issue might be the assumption that this piece is a singular direct response to the painful memory of 26/11. This is nowhere stated in the material handed out nor was it ever mentioned by me during our conversation. I think riding on that assumption was also your anticipation of a new insight or perspective on 26/11; that was never my agenda.

Finally a line about the scale: the choice of the ‘Guernica’ was about finding a symbolic scale for the amplification of contemporary anxiety; to pick
a fleeting newspaper image and stretch it to the dimensions of the historical picture.

A parting mumble: please keep up the blog.

Hi Jitish,
Thanks a lot for your comment, and kind words. I take your point about the specificity, or lack thereof, of your image. It narrows the field of interpretation too much to ask, as I did, for insight into 26 / 11. Just as Guernica is not specifically about the bombing of the Basque town, your painting generalises from the experience of the reception to the Bombay terror attacks.
So let me modify my argument, and make it more general. In my opinion (stressing that last word) the central composite image you used was not interesting enough to provide an insight into the public reception of violence. And I don't mean insight in any analytical or theoretical way, but in ways that are particular to art.
The use of received material is always a fraught enterprise, because the artist needs to take something from the public domain and energise it anew, for which a very incisive concept is required. I didn't see that in your large canvas, though it's possible I missed something.
To provide an example where such re-energising worked works, I'd cite your own pieces that use famous speeches from Nehru and Vivekananda. The burning of the letters and the distorting mirror are formal means to impel a meditation on the passing of time and ideals. They don't change our opinions -- that's not what art is about -- but they alter our perspective, add a layer to our understanding of the legacies of those figures in relation to the current state of the world. The 9/11 connection between Vivekananda's speech and the World Trade Centre attacks provides a temporal / coincidental reinforcing of the thematic issues you are concerned with.
Now to your second point, that of art historical reference: here I am convinced I'm on firm ground. It is absolutely true that the cited work becomes a kind of rival to the work doing the citing. That's why I felt that Reena's pieces connecting with the Taj didn't succeed (apologies for the double-whammy!): if you refer without irony to the most gorgeous building in the world, you'd better produce something spectacular, or else viewers whose minds are suddenly filled with wonderful memories of the Taj are bound to find the work in front of them wanting.
Picasso himself always realised there was an element of competition in reference. By reworking Manet, Ingres or Velazquez, he was arguing he deserved a place on par with them. You have not reworked Guernica in the same way, so the level of competition is at a remove, but it hasn't disappeared.
Just as scale is not merely a matter of painting bigger, but of proving your imagination is powerful enough to animate that space, successful citation involves proving your work is worthy of that reference. If an artist manages to pass the hurdle, the reference work gets co-opted, stops being an obstacle and starts working in the artist's favour.