Thoughts on Picasso and Guernica

Pablo Picasso's been on my mind, thanks to Jitish Kallat and Amir Parsa. Jitish just completed a painting in the exact dimensions of Picasso's Guernica (see previous post) 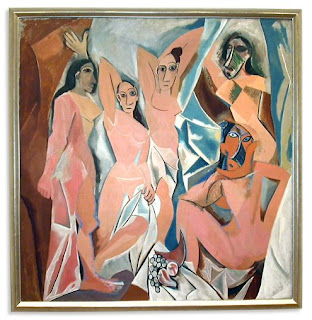 If laypeople were asked to name one painting to represent 20th century art, Guernica would be the most popular pick. If art historians were polled about the same matter, they'd almost certainly choose Les Demoiselles D'Avignon.
I personally believe Guernica is seriously over-rated by critics, historians and the public. Before explaining why, let me provide a brief background about the canvas. In 1937, Republicans and Fascists were fighting a civil war in Spain. Picasso had agreed to contribute a painting to an exhibition promoting the Republican cause. In April of that year, Nazi warplanes bombed the town of Guernica in the north of Spain to help out their fascist allies. Picasso set aside the work he was making for the Republican show and painted his celebrated mural-size canvas instead, as a response to the attack and to all atrocities against civilians. He used only black, white and grey, perhaps as an acknowledgment that he had learned of the attack through newspapers.
The painting is a marvellous feat of control and balance, but I find it melodramatic and dated, filled as it is with wailing, screaming figures begging for the viewer's sympathy and tears. Everything about the canvas is on its surface, there's nothing beyond, no depths to be explored and uncovered. The experience of viewing it when I visited Madrid was rather deflating.
Picasso's best paintings have the opposite effect. Even when they create an immediate impact, as does Les Demoiselles D'Avignon, they contain an intensity far greater than what is revealed at first sight. He was an extremely personal and emotional artist throughout his life, with the exception of what is called his analytical cubist period between 1908 and 1911. Having taught history-of-art modules for years, I've found that, aside from those cubist experiments, his work reaches out easily to people with no knowledge of modern art. Guernica is one of the very few major works he produced with roots outside of his personal experience. That's probably why he could not imbue it with the kind of buried, slow-release emotive values that mark his best work.
If I was to pick my favourite anti-war Picasso painting, it would not be Guernica but Three Musicians. He painted it in 1921, and made two versions, one of which hangs in MoMA, New York, and the other, the one I prefer, in the Philadelphia Museum of Art. 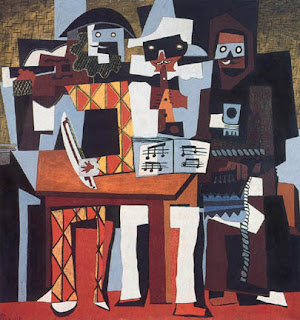 The painting appears at first to be a comical, childish cut-and-paste job. Looking more carefully, one identifies figures popular in the European carnival tradition like Harlequin and Pierrot frequently used by Picasso. The painting gradually casts a melancholy spell; its dark background, and the stillness of the three figures conveys a sense of music that played once but has been quieted forever. It has been surmised that Three Musicians is an elegy for one of Picasso's closest friends, the poet Guillaume Apollinaire, who died in 1918. The figure of the monk is supposed to represent Max Jacob, a former room-mate of Picasso's who introduced the Spanish artist to Apollinaire.
I've always taken the headgear worn by the figure on the left to be a helmet, representing the great war that ended in 1918. It took the lives of an entire generation of European youth, and even those left alive found it impossible to remake the connections which existed between them before the fighting began. Picasso and Georges Braque, for example, worked closely for years between 1908 and 1914. Braque spoke of their collaboration as being akin to two mountaineers roped together. Picasso accompanied Braque and Andre Derain to the train station from where they departed for the front lines. He was later to say of that farewell: "They never came back again" (sometimes translated, "I never saw them again"). In fact, both Braque and Derain did return from battle, and met Picasso frequently enough, but the community of artists that existed in Paris before 1914 had been shattered. I believe Picasso imbued Three Musicians with the nostalgia and grief he felt at the passing of that incredibly rich period in his life.
The painting, then, is not an anti-war image in the classic sense, but for me it is more powerful than Guernica because it mourns the effects of war in a profoundly personal fashion, without recourse to the obvious typology of victimhood.
As a post-script, let me bring in what T.S.Eliot wrote about Shakespeare's Hamlet, which he considered an artistic failure. Eliot suggested that good drama involves the "complete adequancy of the external to the emotion". He continued, "And this is precisely what is deficient in Hamlet. Hamlet (the man) is dominated by an emotion which is inexpressible, because it is in excess of the facts as they appear."
I believe the contrary is the case: the exceptional power of Hamlet, its great success, derives precisely from the 'excess' of emotion to which Eliot alludes. And that is also what makes Picasso's greatest work so powerful and almost unique: there is an emotion there in excess of the available facts, which has somehow been transferred from the man to the work.
A second post-script: Picasso said once, "What matters most to us in Cezanne is his anxiety". Again, the opposite is true: what matters to us in Cezanne is his overcoming of anxiety. But it would be accurate to say about Picasso himself that what matters in his work is his anxiety.
Posted by Girish Shahane Girish Shahane at 10:40 AM