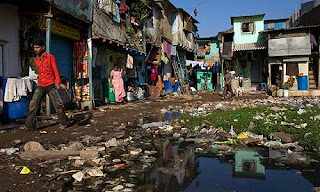 A little less than a month ago, I critiqued Rahul Srivastava and Mattias Echanove's reclassification of Dharavi from a slum to a collection of villages. The pair has written an Op-Ed in today's New York Times presenting their thesis to an American audience. Titled, 'Taking the Slum Out of Slumdog', the article argues that Danny Boyle's Slumdog Millionaire "represents what most middle-class residents of Mumbai (and now all over the world) imagine Dharavi to be. The urban legend of its squalor has taken root because few Mumbaikars have ever been there". In other words, according to the writers, there's nothing squalid about Dharavi, it's all a myth created by well-to-do folks who've never been there. Where, then, one wonders, did those images of squalor so tellingly shot by Danny Boyle come from? Did the camera miraculously transform a clean and verdant landscape into a fetid crowd of shanties? Should Slumdog be in the running for a Best Visual Effects Oscar along with all the other nominations it has received? The truth, as anybody who has ever been to Bombay will know, is that there are slums everywhere, even in some of the most affluent parts of the city. Citizens don't have to travel to Dharavi to learn what a slum is: they only need eyes and noses. Slums are the first thing noticed by tourists coming to Bombay: there's a vast sprawl abutting the airport, and hutments line miles of tracks on the route to the main rail terminus.
Echanove and Srivastava (henceforth, E&S) go on to claim, "Dharavi's messy appearance is nothing but an expression of intense social and economic processes at work." The homes double as work spaces, and represent, "a decentralized production network rivaling the most ruthless of Chinese sweatshops in efficiency". In this, too, they are mistaken. The production in Indian slums is horribly inefficient. That's why Dharavi's workers earn far less than their Chinese counterparts. In attempting to change perceptions of Bombay's slums, E&S swallow the stereotype of a Chinese workplace. I haven't been to China, but I've visited Hanoi and its environs, which have factories modelled on Chinese ones a little to the north. The workshops I saw, hundreds of them ringing the Vietnamese capital, were huge warehouses, well-lit, roomy, full of workers bending over fabric while sitting at work tables. A tedious and taxing job, no doubt, but far from slave labour: created in an environment that allows the standardisation required for mass production, and far safer for employees than are Dharavi's toxic recycling factories.
E&S stress the tropes of post-modern planning that I wrote about in my post on Ahmedabad: decentralisation, community, village, local involvement in development etc. They mention repeatedly that the government has been less than helpful in providing amenities to Dharavi's citizens. But nowhere do they state why this might be. They omit to inform readers of the New York Times that the homes of Dharavi are built illegally on government land. Using their favourite analogy of Bombay and Tokyo, the two write, "Look at large parts of Tokyo. Its low-rise, high-density mixed-use cityscape and intricate street network have emerged through a similar Dharaviesque logic. The only difference is that people’s involvement in local development in Tokyo was seen as legitimate." The only difference? Surely they jest. Their argument is, in any case, disingenuous, because the Tokyo developments they speak of were entirely legal. Citizens had rights to the land on which they built their homes. That is why they were 'seen as legitimate'.
I should stress that S&E aren't mavericks. Crazy as it may seem to some of us, the idea of Dharavi as village rather than slum, a community to be celebrated and cherished, is catching on. Prince Charles, who has become an emblem of anti-rational, anti-modernist architectural thinking in Britain over the past two decades, recently praised Dharavi's "underlying intuitive grammar of design", and held the place up as a model to be emulated. There are no signs, however, that the Prince intends forsaking London's Clarence House, his private estates in Gloucestershire and Scotland, and his new 192 acre Welsh property, to make a home in Bombay's finest village.
Posted by Girish Shahane Girish Shahane at 4:18 PM

Thanks a lot, SV. Hopefully, as time goes by, more people will wander into this neck of the cyberwoods.

Good note. Its a pity that most people who live in Bombay don't know what Dharavi is all about.

Very informative post. Dharavi is a location for the Academy award winning movie SLUMDOG MILLIONAIRE.Dharavi is the largest slum in Asia.Dharavi has a wide array of manufactured products like ceramics, leather items, tapestry, plastic items, bluejeans amongst several others.Dharavi is a backbone of Mumbai. Watch the plastic and metal reprocessing factory located on the eastern side of Mahim Station.