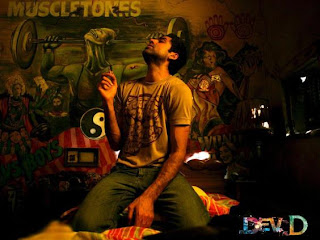 I saw Anurag Kashyap's Dev D last weekend. It's a very good film, though not, I think, the masterpiece some people are making it out to be. While it departs substantially, and refreshingly, from previous cinematic adaptations, it cannot overcome the central flaw in the novel as well as its many film versions: the weakness of the main figure.
If Dilip Kumar couldn't make Devdas a believable and interesting character, there's no way Abhay Deol was going to come close. Unfortunately for Deol, this performance is a step backward from Oye Lucky, Lucky Oye. He plays a rich industrialist's son possessed of an urge to destroy himself and everybody close to him. There is no reason for him to be like that, it's just the way he is. His emotions, then, seem in excess of the facts of his cushy life. I've written about such excess previously, in connection with Picasso's paintings and Shakespeare's Hamlet.
Playing Kashyap's Dev convincingly was a matter of conveying an inner intensity partly masked by outward cool. Deol manages the cool (though not as effortlessly as he did with Lucky), but largely forgoes the intensity. It's a difficult thing to convey, that inner anger which exists for no clear reason. Jack Nicholson did it consistently in the seventies, before beginning to ham it up in the next decade. He went from being a volcano ready to explode, to one spewing lava and gas everywhere. Amitabh Bachchan, too, had that power, although in his case script writers usually provided enough motivation for characters he played to feel the way they did.
When a character does plumb those depths of anger or anguish, he can become a proxy for the feelings of an entire generation, precisely because there isn't enough in his individual tale to justify his emotions or actions. This is true of Jimmy Porter from John Osborne's Look Back in Anger, and of many iconic angry young men in the half century since Osborne's play was performed.
The main victims of the anger of these young men, it should be mentioned, are frequently lovers who've done little to deserve it. We have Hamlet and Ophelia, Jimmy Porter and Alison, Jack Nicholson's Bobby Dupea and Karen Black's Rayette Dipesto in Five Easy Pieces, and Dev and Paro.
Kashyap's film left me with many questions: what if Abhay Deol had, miraculously, made Dev's actions credible through the force of his acting? Would he have become an iconic figure in the manner of the predecessors I've mentioned? Or would the fact that he plays such an affluent character have disqualified him? Is there the kind of generational anger in India now that there was in the seventies?
Posted by Girish Shahane Girish Shahane at 10:56 PM

I liked Abhay Deol in Dev.D...though a tiny shade less than Lucky..Lucky was the true Punjabi-Delhi khoon of his speaking!!!

May be its about the past!! Had Abhay deol struggled earlier in his life or got rejected by All India Radio for a voice worth every penny or believe growing up that his grandmother was his mother and his mother was his older sister, SURELY...ANGER would be much easy to come!!!

Hehe, maybe after making one good film after another and finding none of them become hits, some anger and frustration will creep in.
I should clarify that I didn't think Abhay Deol was BAD in the film. He's got huge amounts of screen time, and keeps us interested throughout, which requires plenty of screen presence. But the film remains about Dev, doesn't become anything larger. Also, the two actresses put him in the shade somewhat.

That’s an interesting few thoughts you end with. Off the top of my head I'd probably venture to say that the generational anger you talk of is probably less so now, replaced by a sort of optimism of aspiration. There is a sense of 'anything is possible' as opposed, possibly, to the feeling of fighting a losing battle against a ‘system’.

Also, the nothingness of his actions is something a certain kind of people, especially young ones, can relate to, or project toward. Particularly when one allows oneself to elevate holllowness to poetic tragedy, or nothingness to a bleakly romantic take on life...which is a phase many of us go through, though in vastly varying degrees.

And oh, I think Abhay D had tremendous, presence here.

True, if he were to become an icon it would be for a generation of nihilistic, rich slackers. But while there are plenty of rich slackers in every multiplex, they're generally pretty happy with family and society, far from nihilistic.

Abhay Deol's performance: i thought he said more with his silence, foregrounding that strange motiveless angst & self-destructive interiority, than he did with his minimal dialogue that was at best, shoddily delivered.
About the generational anger: i sense it's there but it gets manifested in a strange kind of hopelessness & disillusionment that is always brewing at a subconscious level and takes a long time to kick in, such that it gets noticed. I believe it stems from a false sense of contentment that often gets dubbed as living with a sense of endless possibilities. Quite frankly, it is a result of not having to really struggle as much as the past generations did to get something and in fact because the possibilities are very limited as against being endless. One has to often reluctantly accept that almost everything path breaking has already been done. It's a great excuse to not try harder and revel in that hopelessness to a degree that it becomes the natural order of one's life.

On another note, a great film that brings out a deep seated urban/sub-urban neurosis is the incredible Sam Mendes directed 'Revolutionary Road'. It almost takes you back to Edward Albee's 'Who's Afraid of Virginia Woolf', which I think is in the same league as 'Look Back in Anger', 'A Streetcar Named Desire' and closer home Mohan Rakesh's 'Aadhe Adhure' translated as 'Halfway House'. It's a pity to see how Indian contemporary filmmakers are so seldom able to portray that kind of intense angst that can often be found in middle class India!

Girish, dont have time now but will catch up with you on Dev D definitely one of these days. I thought the first half ofthe film was cracking, in pace, in editing , the way the narrative unfolded. The second half, I've really got to see it again, deals with his "nothingness" , a difficult part of the film which I was still handled well.

I agree with Shakester on both the points he adresses, and thought Dev D abjectness truly powerful. I can go on about this film , its just a great film and will not only endure but hopefully open people's imagination of what good cinema in India can be about. After this, I found Luck by Chance so contrived.
Revolutionary Road is really powerful and as I told a friend also real bloody depressing.That will be the day when we get to see desi dramas brilliantly acted out like this one is.Makes you squirm and think and cower and reflect and want to reach out and stop characters saying something ruinous that you know they are going to. See it if you havent.