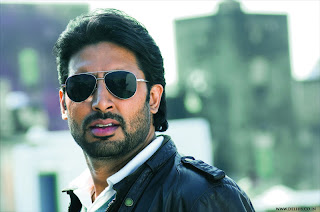 I'm through with giving Abhishek Bachchan the benefit of doubt. Nine years is quite enough time. The man will never be a great actor, that much became obvious when he barely scraped a passing grade in Guru. What's apparent after his smug performances in Dostana and Delhi 6 is that, not only is he incapable of getting under a character's skin, he's not even interested in trying. While forty year old superstars with nothing left to prove are driven enough to reshape their bodies for a single role, Abhishek's grown pudgy, losing the smouldering intensity he showed hints of in Sarkar and Yuva.
In Rakeysh Mehra's Delhi 6, he plays an ABCD, but sounds like an NRI. His body language is as unconvincing as his accent. It doesn't help that he is supposed to be skilled enough at parkour to bound across Old Delhi's rooftops with the agility of a monkey.
Monkeys are central to Delhi 6 (spoilers ahead). At one extreme is Bajrangbali, a deity to be worshipped; at the other a mysterious assailant known as kala bandar, who has been terrorising Delhi's citizens and delighting the media. Abhishek visits India with his grandmother -- who wishes to return to her old haveli in Chandni Chowk to die -- just as the fear of the monkey-man has reached fever pitch. Even as he grows attracted to the girl next door, an aspiring Indian Idol played by Sonam Kapoor, he gets caught up in divides of all kinds: between brother and brother, father and daughter, Hindu and Muslim. In trying to protect, assist and rescue people, he ends up becoming the focus of the neighbourhood's hatred.
The bizarreness of the storyline had plenty of potential, which a director like Emir Kusturica would have exploited fully. Regrettably, Rakeysh Mehra has attempted to squeeze the plot into the form of a conventional musical romance, creating a preachy, tedious movie enlivened by a few bright spots.
Posted by Girish Shahane Girish Shahane at 8:10 PM

I agree. The movie gets progressively too preachy as it lurches towards a convenient climax.

after rang de this is a huge let down. also evidence that you are always only as good as your last project

He may like to be known for Rang De Basanti, but let's not forget that this is the same guy whose first film was a copy of a bad Hollywood movie named 'Face Off'

I wish Delhi 6 had succeeded. It's good to see that even mainstream Hindi films are attempting to write different sorts of scripts nowadays. A turkey like this is a blow for all the others trying to bend the system...