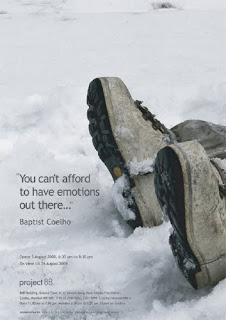 Having heard many good things about it, I was disappointed by "You can't afford to have emotions out there...", Baptist Coelho's solo at Project 88. The exhibition is, ostensibly, about Indian soldiers posted on the world's highest battleground, Siachen. But Baptist Coelho never got anywhere near the glacier, something that was apparent to me as soon as I entered the exhibition space. Or it was clear that if he had, indeed, visited Siachen, and come back with the images collected in this show, it was a worse outrage than my sister going to New York and only getting me that lousy T-shirt.
Coelho travelled as far as Ladakh, but visiting Ladakh isn't worth jack. Couples go to Ladakh for their honeymoon. Soldiers go to Siachen to die, and not from enemy fire. Seriously big difference. If you want to do a show about Siachen, go to Siachen, you're bound to find something interesting there. In Ladakh, Coelho found a sentimental narrative that he could pretty much have made up in Bombay or London. Poor soldiers sent miles up in the mountains, cut off from family and friends, suffering from frostbite and altitude sickeness, under-equipped etc etc. In one video, layers of clothing are peeled off a torso to reveal hairy, slightly paunchy flesh. The piece is titled, in case you didn't get the message, Beneath it all... I am human... Another video is split into two screens: on the left a small girl makes black paper airplanes, on the right, a seated armyman with his back to the camera tosses them into the snow. All rather reminiscent of J.P.Dutta's Border and LOC. I found myself humming Sandese aate hain, humein tadpaate hain while watching the piece.
If Coelho had got to Siachen, he might have found truths not composed of such easy sentimentality. I felt this very keenly because, the previous day, I'd given a short talk to introduce a festival of Werner Herzog films organised by Max Mueller Bhavan, to complement a show of photographs of Herzog and his productions captured by Beat Presser. As part of the prep, I saw some of the German director's movies again, and read once more about the lengths to which he goes to seek what he calls the ecstatic truth, travelling from the mountains and jungles of Peru to the fierce heat of the Sahara desert to the intense chill of Antarctica. The point of such exertions is the belief that out in those extreme places are lying images which will challenge any preconceived ideas one might have. The image itself will convey a kind of truth, which is neither moral nor sentimental.
It might be unfair to juxtapose a young Indian artist's production with that of one of the world's best known film-makers, but this blog isn't about reviewing shows the way I would in a journal. It is about conveying my state of mind in a more personal way, and that was the state of mind I brought to bear on "You can't afford to have emotions out there..."
I do believe, in general, that a lot of art being produced and applauded in India does not go that extra mile required to achieve true excellence. It is complacent work, though it might not seem that way to artists, who always have stories about the difficulties faced in achieving this image or that sculpture.
If you're looking for pearls, make sure you dive deep, for you won't find any oysters mid-way between the surface and seabed.
Posted by Girish Shahane Girish Shahane at 9:26 PM

Girish, the world will come a cropper in comparison to Mr Herzog's manic ways and exacting standards of film making!
I disagree with a lot of what you have to say re the solo show by Baptist Coelho. Yes , I do agree that the harshness of the Siachen glacier may not have been captured like say Mr Herzog would have, but even if he'd tried would've have been at odds this once in a restricted area. And so Ladakh and Manali.
But I haven't seen such a body of cohesive work in a first solo for a long time. I love shows where the artist takes the strand of repetition through several works in different media and ways of expression. For me , it denotes an artist's varied response to a singular stimulus. Baptist has done that here and done it well. As a first, it's a rigorous exercise he has followed, sticking to an idea and presenting it in an innovative and conceptually sound form in so many ways.Technically these artworks are sound, in concept , in execution and display.
For one so young, it was refreshing to see works so well thought out and well finished unlike many a shoddy production put out by senior artists.This IS his first solo in Bombay and I disagree entirely with you that it is complacent work. It may not, as you say go that extra mile BUT he is young and his mind seems to stretch even if the methodology as yet does not.

I'm really glad you wrote in with this comment, DS. My post is pretty harsh, and an alternate opinion is very welcome from somebody equally conversant with the art scene here, somebody who perhaps approached the show in a more neutral mood than I did.

Maybe conversant but not equally...just an amateurs opinion....hope one of your more esteemed critic friends will contribute their opinion.

Went back to hear the sound/ frozen cabinet piece which I hadn't heard at the opening and walked round the show again and liked it once more, each piece does hold its own even as the whole is cohesive.

I enjoyed the review, although I'm uncertain that the antidote for maudlin sentimentalizing is ecstatic, Romantic truth a la Herzog... The latter seems best-suited to depicting the collapse of the political in the face of some transcendent nonhuman Other... what Baptist needs more of in this show is a critical engagement with the political. Herzog's romanticism may not, in the end, be all that far removed from J.P. Dutta's... just a thought.

Alex, I didn't suggest Herzog as an 'antidote' or as a model to be followed in general. I brought him up because Baptists's show concerns humans in an inhospitable terrain, the Siachen glacier, the kind of conflict Herzog has been preoccupied with through his career.
As far as the resemblance between Herzog and Dutta goes, I haven't seen any, but can't take the discussion further because you haven't specified how the two are linked. Herzog is a Romantic artist, narrowly defined in art historical terms. Dutta, and Hindi cinema in general, can be categorised as romantic in a looser, colloquial sense. In my introduction to the Herzog films I made a point of distinguishing between the two attitudes, which are frequently confused because the same word can be used to define both.

I can't comment on the show, having not seen it - but I do agree very strongly about our tendency to do without that last burst of effort. It's not only with our art. I feel this constantly in my field, filmmaking. Same with so much writing, even with so many things we buy which are nice but lack that finishing which would make them really perfect. Perhaps it is something in our culture, this tendency to stop trying harder when we reach some minimum acceptable level because " itna chalega."

I'm not much of a Herzog fan, and if Baptist has made some good videos, more power to him! But I find it funny that going to Ladakh should be a substitute for going to Siachen.

But there is no "chalta hai" attitude in the final works. That is the point finally isn't it? And he did go to the last possible point a civilian is allowed to at Siachen.

Well, civilians HAVE gone up to the fight zone with permission. That national anthem shot by Bharatbala is an example, if I'm not mistaken.
Of course it is difficult getting permissions, but then nobody asked Baptist to create a show about Siachen, right?

Ok. Rest my case. :). And will add the disclaimer that not taking up the cudgels for anyone just that I happened to like the show!May not agree with all the text, but still would send others to see it.

State of mind, I believe, has a lot to do with the instinctive response one has to a work of art. My immediate reaction to Baptist's show left me feeling cold, raw and uncomfortable - a fairly strong reaction to the artist's work on the soldiers in Siachen. Not emotional or sentimental, nor did I feel he was romanticising his subject, I left with a feeling of hollowness and even some distance with the subject because of the depth and variety with which the artist conveyed his ideas. As DS mentions, “the artist takes the strand of repetition through several works in different media and ways of expression. For me , it denotes an artist's varied response to a singular stimulus.”

I returned a few days later, a second time (after having read Girish's blog, especially because I have a lot of respect for his opinion) with a view to see the show more critically. Outside of the debate of whether Baptist could have/should have made it to Siachen (and not just to Ladakh), I think the show holds well as a first solo exhibit by a young artist. It certainly has loopholes (some of the titles are perhaps a bit too sentimental, or the double channel video with the girl and paper planes might have been further edited), but the strong pieces are worth noting; the soldier puppet, the animated video of stills where the soldier’s gear comes off piece by piece, and the video projection on the poncho are haunting and yet refreshing. The show is also technically well installed. I would suggest visiting Project 88 to see the show, for sure...

Thanks for putting your thoughts down, MP. After the last exchange, DS probably felt she was up against a tag team :)

Girish, apologies if I was too brief, didn't mean to annoy you with my comment! Didn't get back to your blog til just now...

I think there has always been quite a bit of slippage between the categories of "Romanticism" (narrowly defined) and the looser, more colloquial sense you refer to. Early Romanticism (with a capital R) certainly had quite a bit of overlap with the aestheticization of nationalist politics in the 19th century.

As for the specifics here... I think in both you find melodrama and epic characterization, coercive mood setting, a drama of self-transcendence enacted through the image of the man(nequin) in extremis, confronted with an overpowering Other. Cinema generally has very deep powerful roots in the Romantic imagination--from its earliest days--and perhaps Herzog's greatest accomplishment is his explicit forefronting of that particular intrinsic quality. Think of the subjective eye of the audience member sitting in darkness before the fantastic screen, held there by (in Herzog's case an ineffable, impossibly held) image.

Finally, on a more practical and down-to-earth note perhaps the Herzog film that would be most interesting to compare with Baptist's show would be his Encounters at the Edge of the World, which I enjoyed immensely, specifically his treatment of the figure "scientist" as compared with Baptist's "soldier"...

You didn't annoy me at all, Alex, in fact I'm very glad you commented and returned to explain yourself further. It is these discussions that keep the blog alive!

Girish, maybe it's time you made your own art. It's easy to sit behind your computer and trash somebody else' s work. Maybe we need critics for art critics, too.

Well, we have you for that. Oh, sorry, I forgot, while I sit behind my desk, you use a mask of anonymity. Nice.