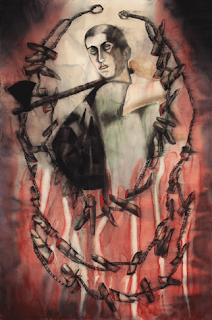 The UK sales of U2's 2009 release, No Line on the Horizon, were disappointing. The album may have gone multi-platinum, but its predecessors, How to Dismantle an Atomic Bomb and All That You Can't Leave Behind had sold three or four times as many copies. The relatively low revenues were particularly surprising because the album came after a five year hiatus, and generated positive reviews. The problem was the record sounded a lot like U2's other efforts. The band, recognising the danger of repetitiveness, had brought in Arabic elements, but eventually rejected these as not sounding genuine.
Those familiar with Anju Dodiya's paintings might see the relevance of the story to her work. Anju's show at Vadehra Art Gallery, Necklace of Echoes, has all the qualities we admire about her, notably a great facility with watercolours. She toils to individuate each image, never resorting to the 'stock-figure-against-flat-background' so popular among Indian painters. The theme she has chosen, of using necklace-like forms to tell tales of sacrifice, anxiety and violence, is parlayed effectively across the show's dozen or so large format pictures.
She is, in every way, a more accomplished artist than she was when her first solo was mounted back in 1991. After that series of rather angsty self-portraits, Anju took to splitting her self-image in two. This highlighted the playfulness in the compositions by forestalling easy biographical interpretations. The play-acting was elaborated in the next few years through images in which she appeared as everything from a movie star to a sumo wrestler. She took to using charcoal, partly to undercut some of the prettiness in her pictures. In one group show she painted on mattresses, and subsequently used fabric and embroidery extensively. The solo before the current one had her experiment with printmaking.
This brief history should establish that Anju has been concerned about not repeating herself. And yet a sense of deja vu could not be ignored as I walked around her latest offering in Vadehra Art Gallery's Okhla space. The echoes in Necklace of Echoes, intentionally or not, were of the artist's previous work. In her latest paintings she has largely moved away from the split-personlity mode, and produced works that share the dark mood of her very first show.
Anju's necklaces take on a variety of forms, from Angulimala's garland of fingers to the burning tyres used for 'necklacings' in South Africa. For me they represent a wheel that has come full circle. After two decades of concentrating exclusively on self-images, she has exhausted the role-playing mode and now needs to find a form of expression that does not involve the self-portrait.
Whatever she discovers, I hope it will be more fruitful than U2's aborted Moroccan experiment.
Posted by Girish Shahane Girish Shahane at 11:16 AM