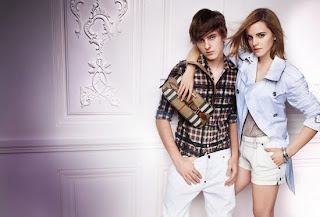 Burberry's latest campaign, shot by Mario Testino and featuring Emma Watson and her brother Alex, is in the news because Hermione's leg appears amputated in one image from the series.
Maybe the photoshopper was channeling Pablo Picasso, who did something similar in The Family of Saltimbanques, an early masterpiece painted in 1905 when he was 24 years old. 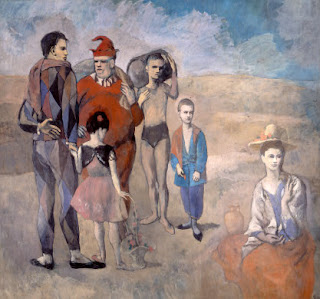 The painting, which hangs in Washington's National Gallery of Art, marked Picasso's transition from blue to rose period, and is unusually big for this phase of the artist's career, a time when he could barely afford to buy large canvases. He reworked the composition extensively, changing the postures and expressions of the group of circus performers, and eventually amputated the right leg of the jester, an act that may seem innocuous today, but was radical at the time. It inaugurated an attitude to realism that still resonates over a century later, as demonstrated by the Burberry campaign.
Posted by Girish Shahane Girish Shahane at 10:04 AM

Nice, but I think you may be being a bit charitable to Burberry on this one. And who knows? Maybe even to Picasso.