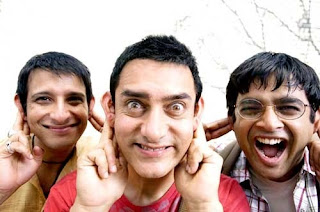 In 1984, Amir Hussain made his acting debut in Ketan Mehta's remarkable Holi (he had briefly appeared in two of his uncle Nasir Hussain's films as a child, but Holi was his first proper role). Hussain played a hostelite in a college whose repressive system pushes one student to suicide. Holi was a product of a workshop at the Film and Television Institute of India, and was released around the time Rajkumar Hirani joined the FTII editing course. Twenty-five years on, Hirani has made a film titled 3 Idiots, about hostel students in an institution whose repressive policies drive more than one student to suicide. Twenty-five years on, Amir Hussain, rechristened Aamir Khan when he went mainstream with Qayamat Se Qayamat Tak, is still playing an undergraduate.
Aamir, you're a fine actor, and actually pulled off the student feel better than the younger Madhavan and Sharman, your room-mates in 3 Idiots. A combination of the body language you adopted, excellent make-up, digital touching-up (?), and the director's scrupulous avoidance of revealing close-ups allowed you to pass muster. But Aamir, you should have given up playing college boys after 1992's Hum Hain Rahi Pyaar Ke. You were far too old for the role in Dil Chahta Hai, as also in Rang De Basanti, even allowing for the excuse that your character had repeated a couple of years in the latter film. 3 Idiots takes the issue to ridiculous extremes. I suggest you make a resolution never to play a student again; I, for my part, have resolved not to buy tickets for any films in which forty-somethings are cast as teenagers.
Posted by Girish Shahane Girish Shahane at 11:49 AM

Hmm. Since I didn't see the film last year, I'll just have to buy tickets this year, and see Aamir's teenage act. But it's a good resolution to make.

Good movie and good acting, lets not try and pick faults just for the heck of it !

Don't agree with you at all but you are entitled to your opinion !

Thanks for the tip on Avtaar, bought 3 D tickets only !

Kapil, if you are happy with a 45 year old playing a college kid that's fine, but suggesting I'm picking faults for the heck of it is a bit weird. I'm hardly alone in my complaint.

I frankly think that apart from playing a character less than half his age, Aamir has also stagnated as an actor long ago.He still remains my favourite among all the Khans,and I admire his ability to market himself and his movies,but somewhere I feel he has stopped growing as a performer.I,too,would like to see him act in more mature roles now!

And...could you please give me your email id?there is something I need to discuss with you.thank u!

Well, Girish, don't you think sometime we criticise everything, it is important sometime to just sit back and enjoy.

That too many people did not pay too much attention to the age can be gauged from the fact that the movie has done really well so more people ignored that fact and enjoyed what was happening than people who paid attention to his playing a college kid at 45.

We can always analyse everything and comment, I do that on my blog and you do it on yours.

Hope that explains what you found weird !

Still a very interesting blog and a nice effort with a definite view .

picture 3 idiots with Imran Khan [the actor] playing Phunsuk wangdu.
albeit a correct observation - but entertainment in the hindi film industry cannot be compared to the western film industry...where the fundamental premise to make a film revolves around making as believable as possible irrespective of the storyline.With massive budgets,and powerful technology most of them come true to their promise.

the hindi film industry,has only recently started it s curve towards maturity...technically,story and acting. the erstwhile over -the-top loud performances,with jarring colors to boot,are not yet passe, we still get a kambakht ishq every now and then, but overall, it is a positive trend.ulike the period between 80- to late 90's when majority were trash.

3idiots can best be described as a socio-comedy.I think at the heart iof it - if the premise is to entertain, then the bracket of acceptance is big.We are a diverse population with diverse interests.A film has to make money,so a bankable star,is a safer bet to pull in more crowds, therefore the role fitment takes a back seat, so instead of an Imran Khan you ssee an Amir Khan play phunsuk wangdu.

At the outset would like to say I have not seen 3 Idiots. Just responding to general comments re hindi films made here.

Why are Hindi films being judged by different standards from not just American films but say Iranian, Turkish, Taiwanese or even Chinese films? In this day and age every product whether medicinal, technological, culinary, whatever is being judged on the world stage. The Hindi film industry takes great pains to market their films abroad, an acknowledgement of the fact that they want to play in the global market. Then why be apologetic anymore in judging their films? We don't do it in art, in science, in admissions to colleges abroad, etc so never understand this continuing line of thought that Hindi cinema cannot change from nonsensical storylines, naach-gaana,mannered acting and ageing actors still being cast as teenagers.

I'd like to very much believe Gyanban when he says Hindi cinema has only just begun it's ascend on the curve to maturity (with apologies to all the efforts of Satyajit Ray, Shyam Benegal etc) and support v much the Kashyaps, Bhardwajs, Dev Benegals, Bannerjees and really hope this ascent does happen.

personally i think attempts at 'realism' in movies are completely overrated :)

in fact, i like bollywoods lack of pretense. almost like 'hello, dont expect me to try to fool you into thinking that
-this can happen
-this has happened
-this can happen to you'

more so because movies are an escape from me (like some others i know)
i dont want pain, lasting misery, a cynical ending.
i want puppies, unicorns, rainbows! the works!

'reality' is an everyday phenomenon
:)
plus. all art DOES end up imitating reality and vice versa. if you look close enough, the most self-acknowledged nonsensical drama can unveil prejudices and attitudes in society.

then again, i think decrypting is overrated.

being a lit kid... i am honestly SICK of hidden meanings and complex ideas based on sociological probabilities.

ohhhh ive written too much!
sowwie for rambling etc.
:)

Great to see that I am not the only one who found this flick utterly ridiculous. Thanks for the background story, maybe I will tell that next time someone starts singing paeans to 3 Idiots. Try to get hold of the latest issue of OPEN with a cover story on this Khan, interesting insights for the taking.

Sujoy, I didn't think 3 Idiots was completely ridiculous, I liked the first half a fair amount. Will take a look at the OPEN story.

By the way, how did they manage to pacify Chetan Bhagat....he was threatening legal actions one day and then went on to apologise the next day. Hmmm, smells fishy.

Finally saw 3 Idiots.... the movie prior to the interval has it's moments... it's brought out the irreverent in the young we see around us well (the ma is no longer a sati savitri even if she really is one, tho that bit about bhindi being 12 rs a kilo made me trifle uncomfortable even as it brought on the chuckles around me). But still a movie ain't good if it has only moments and post interval it succumbs to every formula in Bollywood's book.

Yet, as a reach out to the masses movie with a few good ideas...and combine the college set up with a road movie...and stick to the raking in the moolah with AK as a college kid...it's only a few of us who seem to be saying grow up . AK and Bwood.