Freshly ground pepper for you?

You know those mills that waiters use to grind fresh pepper onto your Caesar salad in upscale restaurants? They seem to be getting bigger, like guns did in Hollywood movies between the sixties and eighties. One specimen we spotted at Olive the other day was so ridiculously large I had to take a picture of it. How is a server supposed to point that thing and get his aim right? 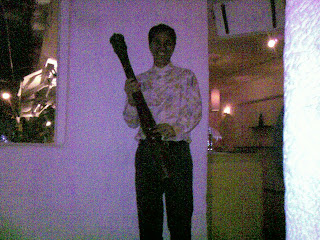 By the way, I did NOT ask the waiter to hold the pepper grinder in that position. He was rather reluctant to pose at all, poor guy. He tried offering the object to other staff, but they hurried off, and he was too polite to refuse my request. Luckily, the image quality is so poor he's barely recognisable.
Olive has a new menu, but some things haven't changed. Like, the food we ordered was good, but not exceptional. That's always been the case. I haven't tasted a memorable dish there, nor an atrocious one. Funny the same middling quality should have been maintained through changes of chefs and proprietorship.
Posted by Girish Shahane Girish Shahane at 7:54 PM

ya... i have been noticing that huge bazooka in quite a few eateries. whats wrong with the smallish table version. and i have never understood why you need a waiter to get pepper on your plate.

That is pretty funny, but I'm feeling a bit sorry for the poor long suffering waiter.

Seana, I was in two minds about uploading the image for that very reason, but couldn't resist for too long.

Maybe it's to prevent theft. Even with smaller pepper grinders, they're so reluctant to let you have them or leave them on your table, I'm convinced they think you may walk out with them.

But you're right, no one will be able to recognize him--except possibly his mother.

Equivocal, you're right about keeping pepper mills on the table, that's a risk. But I don't see why a six-inch or footlong grinder isn't adequate for the job. What benefit do the extra inches provide?