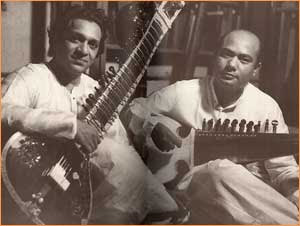 As musicians sign on for a gig to aid Haiti, it's worth thinking back to the event that started it all, the Concert for Bangladesh, organised by George Harrison at the behest of Ravi Shankar, and held on August 1, 1971, at Madison Square Garden, New York. Apart from Harrison, Bob Dylan sang a suite of songs, Eric Clapton played guitar, Ringo Starr drummed, and Ravi Shankar was joined at the start by Ali Akbar Khan on sarod and Alla Rakha on tabla. Genius.
The Indian maestros played a tune called Bangla Dhun composed for the occasion by Ravi Shankar. A recording of the performance can be viewed here. If you want one short encapsulation of the sound of India circa 1971, this is it for my money. Having said that, I'm not knowledgable about music.
There's a hilarious moment about 4 minutes in, when Ravi Shankar and Ali Akbar Khan adjust their instruments. As soon as they stop, the crowd bursts into applause, at which point Ravi Shankar says drily, "Thank you, if you appreciate the tuning so much, I hope you will enjoy the playing more".
Posted by Girish Shahane Girish Shahane at 10:59 PM

That's a great response on Shankar's part. I am sure I would have been one of the clappers if I'd been there. I guess all that can be said is that enthusiasm counts for a lot.

True. My friend Naresh mentioned that Ravi Shankar's daughter Anoushka had precisely the same experience during a Central Park concert in 2000. With presence of mind, she could've made a quick reference to the earlier occasion, but Naresh says she just smiled, maybe thinking to herself how little had changed in thirty years.

Ravi's other daughter Norah Jones strangely enough is not playing at any of the Haiti benefit concerts. With that provenance you think she would.

Now of course I had no idea Norah Jones was Ravi's daughter. I think I could probably figure out where to clap at hers, though.

Odd about the Haiti benefits, too. Could be that she just doesn't like George Clooney.