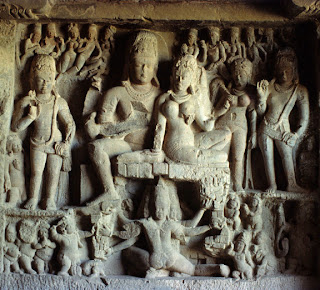 Within his domain of economics, Swaminathan S Anklesaria Aiyar can be an incisive writer. His column about heritage conservation in today's Times of India is, unfortunately, a farrago of factual errors and misdiagnoses. He tells of his disappointment at finding the paintings of Ajanta and sculptures of Ellora largely eroded, compares these unfavourably with the finely detailed carvings in the Dilwara temples of Mount Abu, and claims that the reason the marble sculptures of Dilwara are pristine is that they are part of living monuments in which things broken are constantly replaced. From the comparison between Ellora and Dilwara, he draws the conclusion that living monuments in general are better preserved than those in the hands of the ASI. Finally, he suggests building new temples near Ellora to supplement the existing site and help keep local artisanal traditions alive.
Here's a paragraph from Anklesaria Aiyar's piece:
Why is Dilwara not eroded and discoloured like Ellora? Because the Dilwara temples are alive and functioning, attracting millions of worshippers. The temples are maintained by religious bodies, not the ASI. Donations from worshippers, plus the cultural force of ancient tradition, enable the religious trusts to hire the best artisans and maintain the highest quality in constantly repairing and replacing old, damaged sections. The replacements are as exquisite as the originals. This keeps alive ancient traditions and skills in art, which have been lost at dead monuments like Ajanta and Ellora.

1. The Dilwara temples have not been constantly renovated. The carvings are pretty much what they were when first completed. When looked at closely, the damage to them becomes visible, a nose missing here, a broken limb there.
2. There are a number of reasons why Dilwara is in a better state of preservation than Ellora. Work on Ellora began five centuries before the Dilwara temples were constructed. Secondly, the art in Ellora and Ajanta is affected by wind, rain and seeping water, wheras the carvings in Dilwara are inside protective structures. Thirdly, Dilwara uses marble, which is a very hard stone. Marble is also valuable, and therefore treated with more care than the rock of Ellora.
3. Many living monuments have gone through extensive restorations, and are not the better for it. The famous Mahavir temple at Osian, for example, has had its old pillars and lintels substituted with replicas produced in a workshop nearby. The new work has none of the exquisite grace of the 'damaged' columns it replaces.
4. Since Ellora consists of rock-cut temples, there is no method of redoing eroded sculptures while retaining the spirit of the place. You can't carve deeper into the side walls because you'll soon punch through into the next cave.
5. Ellora was damaged long before the Archaeological Survey of India was formed, so blaming the ASI for its state of repair is strange.
6. Anybody disappointed with Ellora has no understanding of sculpture. Despite the effects of time, those caves contain the finest examples of Indian sculpture's incredible treatment of mass and volume. There are, of course, sites offering greater delicacy of detail, notably Dilwara and Konark, but this does not detract from the achievement visible at Ellora.
6. Anklesaria Aiyar's argument is part of a trend of thought that believes, 'private enterprise good, government bad'. In the current context, it means living monuments funded by donations are good, protected monuments tended by the Archaeological Survey of India are bad. This is an entirely wrong-headed approach to the issue, and leads to foolish suggestions of the sort at the end of Anklesaria Aiyar's column (build new temples near Ellora!).
Posted by Girish Shahane Girish Shahane at 10:26 AM

Agree with your thoughts and analysis 100%. Aiyar, like many privatization fanatics, thinks it is the solution to every problem in the world, and end up looking foolish.

There are many temples, which are protected monuments by ASI, but where active worship is going on(and managed by other bodies). For eg: the temple in Rameswaram. Due to the religious practice involving the bathing in the tens of wells inside this temple, it remains especially stinky, sticky and horrible, very much so at the "speciality of the temple" i.e the long corridors. It would have been much better preserved if there was no worship going on.

Another example: consider the Vittala temple (no worship) and Virupaksha temple (active worship going on) in Hampi.

For worshipers, dirt and stink seem to be OK. And in many temples, like Madurai, they have started to hide the lower half of the sculpture with a cloth(which, of course, is naked).

And the ASI can manage the preservation well, if they really put in interest. Mahabalipuram is an example.

Even on economics, Iyer was interesting 10 years ago. At some point, he became a caricature of himself.