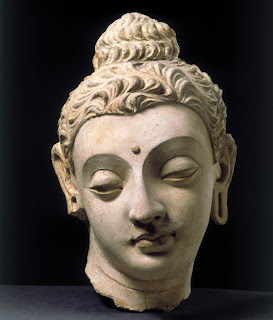 The first public lecture I ever gave involved a lot of Picasso. At one point in the talk, I conveyed what a materialist the Spanish painter was through an example from his teenage years. He had drawn the Holy Family resting during their escape to Egypt, and sketched a cloudy mass above. A friend asked him if it represented the Holy Spirit. Picasso replied, "Holy Spirit! It's a date palm. They needed to eat something, didn't they?"
I'd put the anecdote in to amuse those in the audience who might've been getting bored by that point, but the story had a strange effect. The round of questions and comments that commenced 30 minutes later went something like this:
"Do you really think Picasso had no spiritual side?"
"Don't you think all art is spiritual?"
"Who, according to you, would be a spiritual modern painter?"
"Would you classify De Kooning as spiritual?"
Then a succession of artist names with the spirit question appended.

Yesterday's lecture was a bit of deja vu. Speaking of masculinity, I stuck exclusively to issues concerning the male body. The body in painting, the body in advertising, the body on the sports field, body body body.

The first question was, "Actually, according to science, we are all women, since we all have X chromosomes, right? So those who say Indians are less masculine are only saying we are closer to our genes and to spirituality."
I saw no way I could possibly respond to this, so I asked for the next comment, which was:
"With the incursion of Islam, we have the introduction of the gendered soul into the sub-continent, whereas Indic tradition has no conception of the soul as gendered; this shift creates a crisis of masculinity."
I said I had no idea the soul was gendered in Islam.
There followed a discussion about Christian souls, the number of Quranic heavens and what they signified, the gender of Brahman in the Upanishads and so on.
Next time I think I'll clarify in advance, "Please don't ask me about souls or spirituality. Even when I show an image of the Buddha, I'm only interested in his body".
Posted by Girish Shahane Girish Shahane at 8:09 PM

That's funny! I've had a similar experience myself in talks on colonial masculinity, where inevitably the question is a variation of "but we have ardh-nari as an ideal, so these formulations of masculinity are just perversions/unimportant..." The spiritual question hasn't quite hit me yet, but I do get bogged down with totally ahistorical conceptions of gender masquerading as all time universals.

Oh, I wouldn't bother. They'll only find a way to get around it.

Salman Rushdie came to town a few years ago. He was the best question taker I ever heard. People would ask all kinds of things, some cringemaking, some relatively on point. But it didn't really matter. Somehow he was able to take any of these questions and turn it into a question he really wanted to answer. And he did it without ever shaming the person who asked the question too.

So, for instance to the first question he might reply, "Perhaps we are closer to our genes and to spirituality. And speaking of genes, let me tell you about a dinner I attended with Watson and Crick once...

To the next, "It well may be that in the Indic tradition the soul is not gendered. But I'll tell you what I think the real crisis in masculinity is all about...

The "only interested in Buddha's body" line, though, is a keeper.

While your lecture was a wonderful personal take on masculinity in south asia and provided moments of mirth with video clips and condom sizes while actually probing more serious undertones, the questions left me bewildered and then rolling in laughter helplessly.
So, like I told Rashmi yday, when Brahma's neuter gender came in, I just had to leave.
And that first question truly set the tone!! NO. We are NOT all females. Thank heavens (3 or 7, I think that was argued too) for the Y chromosome, post colonial, constructed, genetic, biological or even a sweet loving Bengali outlier one!!
Girish, will come for all your lectures and will henceforth structure time to stay back for question time.

Zizactly, do tell us more about your colonial masculinity talks.
Seana, Rushdie is a fabulous speaker, during an early visit of his to India, my mother interviewed him, and I (then a kid) was spellbound listening to the tape, the shape of his sentences. So I'm not surprised he manages to make something interesting out of unlikely questions.
DS, thanks for coming. As long as nobody leaves during my talk, I'm happy. I usually slip out of other peoples' lectures during question time, so I completely understand your departure.

Was basically working on masculinity issues with swadeshi artists - found that it generates a lot of discomfort in reconsidering them as gendered subjects rather than nationalist heroes. would love to hear/read more about your work on this.

And I would love to hear more about what swadeshi artists are.

Very good lecture. One is so used to Indian iconography and recognising Budhha, Shiva etc., that I never NOTICED this issue of lack of masculinity.

And the Q/A session was priceless. I never leave the Q/A as they are so 'paisa vasool' (at the expense of the speaker, sigh!). Last week, at JP, there was a lecture by the chairman of INTACH, J&K. He talked about built and natural heritage of Srinagar and showed some conservation work. The Q/A was however all about teaching art to children and whether it is possible and such like.

Thanks a lot, Smita! Poor chairman, INTACH, hope he found better ways to deal with the questions than I did.

Thanks, I had the general sense but not the actual meaning.

Thanks, zizactly. I suspect that helps Girish a bit more than me, but it does set me on the right road.

Oh I really wish I could've attended the lecture. Are you thinking of uploading it?

No plans to upload it right now. It's a bit too edgy and politically incorrect to put out in public. But I'm probably going to be delivering a version in Delhi in a couple of months, so if you stay in the Capital, look out for the notice.