Another incumbent bows out 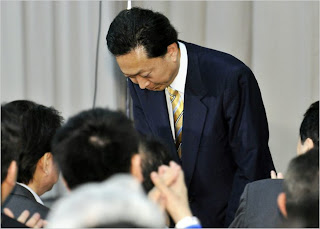 It's been a rough year for incumbents. Pretty much every major election since the Indian poll of 2009 has led to a change at the centre, the most notable shift being Labour's loss in Britain after 13 years in power. Yukio Hatayoma, who took over in a landslide win against Japan's political establishment eight months ago, has just resigned, unable to deliver on election pledges and facing an approval rating below 25%.
The popularity of Angela Merkel and Barack Obama has been pummeled by crises not of their own making. Merkel was faced with two dreadful choices after the Greek fiasco: either underwrite a massive bailout, or stay on the sidelines and watch the Euro contagion spread. It's hardly surprising she didn't stick to one firm line through the difficult weeks of negotiations. Obama faces a schizophrenic electorate, which hates government interference in business, but wants the federal authorities to solve an environmental disaster created by a private company, requiring technology that only private firms possess as a result of the electorate's small-government bias. If oil keeps leaking in the Gulf till August, his ratings will slide to new lows. Meanwhile, his multilateral agenda keeps getting sidetracked by the actions of Israel, a rogue nation that flouts international law casually, secure in the belief that the US will always bail it out. Obama would like to change the US-Israel equation, but that's almost impossible to achieve, given entrenched loyalties within the American political establishment.
Until the world's economy improves perceptibly, leaders will keep paying the price at the polls.
Posted by Girish Shahane Girish Shahane at 8:56 AM

I don't understand why the Americans are annoyed about the oil spill.

They waged war over oil. And now they have so much of it that they can literally bath in it, drink it, eat it. But they are still complaining. There is no pleasing, these Americans!

Excellent points!!! The dynamic of the politics that we knew so far is changing rapidly and it will be an interesting scenario in India itself. Just hears that the reds have been given a sound thrashing in the municipal polls...Srikanth

Indeed. And Mamata Banerjee says she's going to transform Calcutta into London. Best of luck with that...