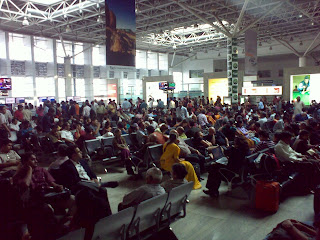 I returned yesterday after a week spent in Zurich, which, for good reason, is regularly ranked as one of the world's best cities in quality of life surveys. I was rushing about from morning to night each day, but never felt as exhausted as I did within half an hour of stepping back in Bombay. That was partly because of the hometown's hot embrace, its noise and crowds. Mostly, though, it was because of its dysfunctional systems. In the past, obstacles to progress used to make themselves apparent right after one stepped out of the plane. Now, immigration and customs are painless, but the nasty stuff starts outside the airport.
To begin with, there's no public transport option. The taximen's union will ensure it stays that way. To prevent taxis from cheating customers, the administration has set up a system of pre-paying the fare, which means you end up shelling out in advance the amount the driver would have extracted from you on top of the meter fare.
There's a long line for booking a cab, after which you go out and hunt for the vehicle carrying the license plate number listed on your bill. Quite often, you don't find it, because the driver's left or the cab's hiding in some inaccessible corner, in which case you have to go back and stand in line again for another number.
Luckily I found my guy easily, but two minutes into the ride he stopped and crossed the road to stand in another line, some kind of police verification procedure. Beggars have found this an opportune spot to harry passengers. Soon after the driver returned, we encountered that other Bombay specialty, the 11pm traffic jam.
I can see the objections starting to form. Switzerland has fewer people than Bombay. Its banks use secrecy laws to make money from corrupt government officials in nations like India. Oh, and it gave women the vote after we did. None of this alters the shock of going from one of the world's most livable cities to one of its least habitable.

Update, 22 June: Today, taxis are on strike. Will be fun for tourists flying in to Bombay late at night: no train, no bus, no cab, no rickshaw.
Posted by Girish Shahane Girish Shahane at 1:37 PM

And you know, the roads are just too clean to have any character. :)

What d'you mean he made you wait? D'you mean you missed a train because you were late? That seems fair to me. As for those roads, the landscape pretty much does the work for them. If character means potholes and traffic snarls, I would happily do with less, or none :)

The irony in the comment that 'Y?' made about missing the train is that we (read as Indians) are so removed from the concept of time that being 3 minutes late seems business as usual. Did you ever think that there would have been folks on the train who may have missed an appointment if the train wouldn't have left on time? Oh, I forgot-you wouldn't be able to relate to it as you may have never been on time for an appointment.

FYI: I'm planning a trip to B'bay and am not looking forward to haggling with taxis/autos, much less negotiating the traffic. But I guess the Indian experience would be incomplete without it ;).

your observation is very true girish sir. no matter how much sophisticated and developed mumbai and our other metro cities get, the scenario metioned in your blog ALWAYS REMAINS!!