Ashley Tellis is a South Asia expert at the Carnegie Endowment for International Peace. He looks like this. 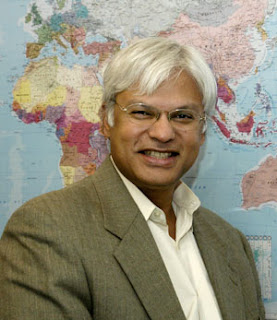 Ashley Tellis is also an academic who got his Ph.D. in English Literature from Cambridge and has had several run-ins with educational institutions in India because of his advocacy of gay rights. He looks like this.

The second Ashley was a classmate of mine in Elphinstone College. He has just been dismissed from his probation at IIT, Hyderabad. The Times of India, reporting the story, used a photograph of the first Ashley. It was a mistake that had to happen, something I was avidly awaiting. I was hoping it would take the form of a mash-up created by a reporter after googling the name. Something like, "Foreign affairs pundit and gay activist Ashley Tellis met Prime Minister Manmohan Singh yesterday"...
The photograph's been removed from the article to which I've linked, and the Times epaper has deleted the entire story. Is that allowed? Don't newspapers have an obligation to keep their digital archive intact, errors and all?
For those who happen to get the Bombay edition of the Times, the story's on page 15.

UPDATE: The Mirror repeats the Times of India's error in its Bloggers' Park column, and so far has not taken the pic off its website.
Posted by Girish Shahane Girish Shahane at 9:41 AM

Shame on Tellis(the second one)

Why are we so threatened by people who are different from us? I have known professors/teachers who are straight and pretty lecherous; and then there are those who are insincere and know nothing of what they try to teach. Such teachers can, of course, stay....
Is it not the responsibility of educational institutions to nurture multiplicity, tolerance and honesty?
Whoever these rats who persecuted Tellis are, their God is not going to forgive them; no matter how many coconuts they break. And if there is a hell, you know where these folks are headed. Or maybe, their God is a rat too, which makes it all okay, I suppose.
It is one of those things that makes me hang my head in shame, disgust and pure indignation.

I wonder how either Ashley is taking all this...

what an embarrassing boo boo. i sort of knew ashley in college. however, the story hasn't been deleted from the epaper. it's there along with the mistaken photograph. and often online versions of stories don't have photographs. that could explain the absence of the photo.