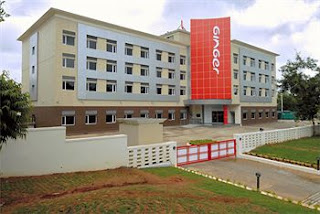 I’m back from a three day poker trip, and sort of rested, although the ground still moves under my feet every now and then. That’s to be expected after sitting through three straight nights in the bottom deck of a floating casino.
Along with about twenty of the players who travelled to Goa for the India Poker Championship, I opted to stay at the local Ginger, part of the Tata Group’s budget business hotel venture modelled on chains like Ibis and Holiday Inn Express. Ginger offers a good deal for single travellers, unlike other hotels in Goa that shave just 10 or 15 percent off their double occupancy rate. Rooms are clean and neatly designed, the aircon and plumbing work, and breakfast is included. On the downside, the Wi-Fi rate is extortionate, at over 100 rupees and hour, and coverage is pretty bad in the rooms. I took my laptop along, but preferred to stroll across to a cybercafe to blog and check my email.
I was surprised to see a number of holidaying families staying at the hotel, a sterile building within the most sterile precinct in all Goa. Last time I was there, during the previous IPC in March, I even noticed a honeymooning couple at breakfast. Makes me wonder what experience such people are looking for when they come to Goa. It isn’t the beaches, booze and nightlife; it isn’t the atmospheric lanes of Fontainhas and the architecture of Old Goa; it isn’t the lush landscape of palms, cashews and paddy fields. What, then, draws them to the state?
The draw for me this time was poker and nothing but poker. The rest of this post will concentrate on that, and will sound like Greek to those unfamiliar with the game. You have been warned. 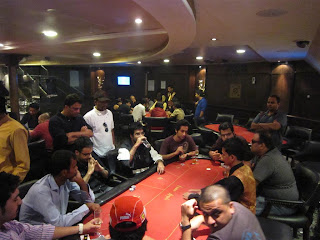 I didn’t suffer any huge bad beats like I had last time round. In fact, during one cash game, I hit a set of queens to crack pocket aces. It’s just that I didn’t win coin flips when I most needed to. During the 10K tourney I had pocket 5s against my friend Sam Rattonsey’s AK offsuit; we both had medium stacks, but the blinds were getting uncomfortable. I pushed from the button and of course he called from the small blind. He hit a king and went on to place first, which made me glad he’d won that hand and not I.
I played a few interesting hands in the late stages of the 20K tourney.
Hand 1:
I’d built my stack to 15000 when the blinds were 300 / 600. Under the gun, I was dealt pocket queens and raised to 1800. A guy in middle position reraised to 5000. He was on tilt a bit because he’d split a pot holding aces against pocket tens, all chips in pre-flop, when the board showed a spade flush and neither player held a spade. Still, I felt I was probably beat, putting him on kings, with a small chance I was racing against AK. If he had kings, all his money was almost certain to go in on the flop. If I hit a set of queens, I would definitely double up. I was getting about 6 to 1 implied odds, which didn’t justify a call when the odds were 7.5 to 1 against hitting that set. I called mainly because I had to factor in the possibility that he had AK. A queen did show up on the flop, and I did double up, and was in a pretty strong position at that point with 30K chips.

Hand 2:
I was in the big blind, still at 30,000 odd, with the blinds at 1000 / 2000 and about fifteen players left. Chap in early position limped, as did the short stacked small blind. My hand was A 10. The limper, whose name was also Girish, had about 11,000 left over. I’d been at the same cash table with him the previous night, and knew his style well. He was, basically, the biggest calling station I have seen in my life. He paid me off a number of times, but his most remarkable calls were against other players. One time, he called a preflop raise, a bet on the flop, and an all-in bet on the turn with K Q, having hit neither card, and having no draw. Another time, he called someone down to the river and called a huge river bet with just ace high. So basically I knew I was getting a call from him. I figured A 10 was good and pushed. He called with K Q and rivered a queen. I lost about half my stack in that hand.

Hand 3:
The very next hand, a player from my Bombay group, Masood, shoved with about 15,000 from middle position. I was in the small blind and again had A 10. I felt Masood was weak, and was hoping he had A 9 or A 8, which would make me a 7 : 3 favourite; in any case I was sure I was ahead and called. He showed K Q, which meant I was a 6 : 4 favourite like in the previous hand. Unfortunately, he turned a queen, and left me with just one small blind worth of chips, which lasted four more hands before I was eliminated.

It’s been six IPC events without a cash, which is a bit frustrating. Luckily my success at the cash game tables allowed me to more than cover my buy-ins for all those events, plus travel and accommodation expenses.
Posted by Girish Shahane Girish Shahane at 11:34 AM

Poker in Goa! What a refreshing change from all the blogs I've been reading that only talk about Vegas and the WSOP.

Sorry to disappoint you, JR, but pretty much every player in that Goa casino would've preferred to be in Vegas playing the WSOP :)

Girish, do you know the great-bong? It is weird, I feel I 'know' both of you and that I should introduce you guys to one another if you have not already 'met' :-).

You are a man of many aspects, Girish.

One of my friends was relating the story of her husband's entry to the internet. He can barely type, but he started playing on line poker and gradually became virtual buddies with a lot of these people and now not only he and the buddies--both male and female--but their spouses and even entire families take vacations together in order to play poker together in the real world. Somehow don't think they've been to Goa, though.

Anyway, who says the internet is isolating?

Seana, thanks. Meenakshi, I'm not sure what or who you are talking about...

Man , are you and Amit millionaires or what??? seriously though, I am a poker player myself but how do you these events occur? Is there any ad somewhere? Srikanth

Srikanth, I've linked to the IPC blog; they also have a website, as do the two main casinos in Goa. Lots of information is disseminated through Facebook groups.
Amit and I are far from being millionaires. The millionaires who played the IPC stayed at Vivanta, both Amit and I were at Ginger.

Have you read Malcolm Gladwell's theory that you have to spend 10,000 hours doing something before you get really good at it?

How many hours more do you have to put in before you can try Vegas and the WPT?

Also can you really bluff your friends? That would seem very difficult to me especially in hold em where there are long pauses at every stage of the game.

Adrian, My friend Amit's a big votary of the 10,000 hour theory, and is trying to make the time as quickly as possible. The Web gives us the option of improving very fast: people can play in one year a quantity of hands which previously required over a decade to play. There was some talk early on about how Web whiz kids were no good on the felt but that's been pretty conclusively disproved now.
Bluffing friends isn't that difficult; bluffing people who have played with you a lot can be tough. But it really depends on the kind of game you play; people who are hyper-aggressive and bluff a lot will often get caught bluffing, but will also get paid off when they have a strong hand, because you can't really place them on a hand. People like me who play more conservatively can get away with a big bluff more easily because when we bet big it usually means we have a big hand; conversely, we rarely get paid off big with strong hands because people tend to respect our raises.
The trick is to be aware of your image and try using it to your advantage.

So when you play each other on the web do you actually see each other? Because otherwise you wouldn't get much practice bluffing, which seems like a drawback.

Seana, you're right, on the Web we can't get live 'tells' like shaking hands etc. There are subtle time tells; more importantly, betting patterns offer important clues to what a player holds.
The bets usually tell us more than peoples' expressions even in a real-world game.

Interesting. It reminds me a bit of some research I've been doing into how governments attempt to prevent money-laundering. Patterns are important there too.

Oh, here you go. I enjoy his blogs. Incidentally, he has had something to say about Union Carbide, too. I am yet to read it; but anyway.

Thanks for the coverage G. Quick shameless plug here. The IPC website is at www.indiapokerchampionship.com

So Girish, did you find time to read Arnab Ray? Do you enjoy his blog?

haha did u play the girish from bangalore. He is the biggest calling station . its even better in cash games :) betta luck next time.

Wow nice to see poker building up in India. I have been playing here in US for quite some time didn't knew India even had a poker championship :)!

Nice to read your post and analysis of your hands!

Thanks, Mayank. There are three championship cycles currently in place in India, the IPC, the IPS and the IPRT :)
The format for all three is essentially the same, three days of tourneys taking place once every quarter, with buy-ins ranging from 5000 to 20000.
That's a pretty small amount, so it can't compare with poker tour events elsewhere.
There was a move to put Goa on the Asian Poker Tour map, and one tourney with a USD5000 buy-in was held back in 2007 or 2008, but the idea then fizzled.