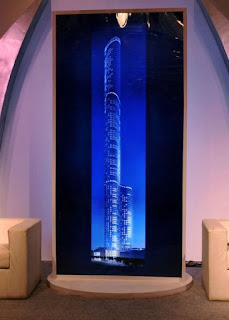 The world's tallest residential building is here! Or so billboards around the city claim. The tower is called World One, is 117 storeys high, and is owned by the Lodha Group. Look around Bombay's skyline, though, and you won't spot anything close to a 1500 foot high building. The Lodha Group's website doesn't so much as mention World One. What gives?
It seems the builder doesn't have necessary permissions to build the record breaking high rise, nor money enough to see it through. Those hoardings are meant to attract advance bookings and private equity interest to fund the project. The address of World One is said to be Upper Worli. But Upper Worli, as I recall, is the figment of the imagination of admen whose offices moved to Lower Parel a decade ago, and who claimed half-jokingly to have shifted to Upper Worli to shrug off Lower Parel's downmarket associations.
We have, then, a building that doesn't exist, in a neighbourhood that doesn't exist, funded by money that doesn't exist. If you possess a few extra crores, this phantom project might be where you want to sink them.
Posted by Girish Shahane Girish Shahane at 9:27 AM

Just as Dharavi is intended to become Bandra Kurla South.

is this even in lower parel. Last I heard it was in Wadala!! Worli to Wadala.. hmmm

Will they expect phantom crores? :)

I could see a good sci-fi movie coming out of this somehow...

Why sci-fi, Seana? After the banking collapse of last year, phantom calculations based on non-existent phenomena are very much part of the real world!

Absolutely. I was just thinking of being able to somehow enter the alternate reality where that building actually exists. Character caught between two realities kind of thing. Actually, maybe I could get people to invest in a non-existent movie about a non-existent building. Hopefully, the money itself would actually be real!

The tower will come up on the 17-acre plot of the defunct Shrinivas Mill in Lower Parel, central Mumbai, which the Lodhas bought nearly five-years ago.

And according to SEBI norms, the ad campaign clearly states below it that Lodha Group is filing an IPO soon.

And the best way to raise money for an IPO is to promote a phantom project, I suppose.

no wonder they call investing in reality 'alternate assets'. they are alluding to the alternate reality.
funny one.