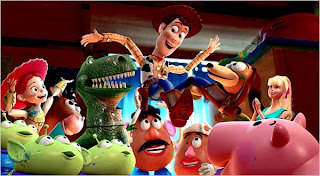 The term Reality Distortion Field was coined to describe the effect Steve Jobs had on workers at Apple; the phrase has come to be used for the slavish praise garnered in the media by Apple products. After watching Toy Story 3, I'm wondering if Pixar, Jobs' other brainchild, generates a distortion field of its own. What else could explain the adoring reviews received by what is a well-crafted but rather tedious sequel?
Here's the plot: Sheriff Woody, Buzz Lightyear and the rest of the cast are locked away now that their owner Andy is a teenager. Before leaving for college, he decides to put his beloved toys in the attic, but they end up being donated to a day care center. Now the toys have to escape and get back to Andy. The lost-and-found theme was done much better in Finding Nemo, which also had a far richer visual texture, as did Up and Wall-E. Pixar is now in sequelitis mode, with Cars 2 and Monsters Inc. 2 on the way. I think Toy Story 3 might be looked upon in the future as the moment when the studio lost its verve.
Posted by Girish Shahane Girish Shahane at 8:34 AM

Girish I loved the movie...Ultimately like any art liking or disliking a movie is subjective...I loved the climax...I could relate to the animated toys in a way I rarely relate to live actors..the movie deals with so many so called dark themes so effectively...being abandoned, abuse of power, attachment,the feeling that one should be loved, rejection...This would be for me the movie watching experience of the year..btw am a huge Hollywood animation fan...

hi girish- kinda felt the same way as you. whereas parts one and two had some wonderful moments and creative leaps of imagination, part three was more linear and a bit routine. that there are no theatres in south mumbai screening it in dull dull 3-d make me a bit more peeved at it.
hemant

Hemant, glad you concur; Ruchik, I agree the themes are dealt with well, I'm not saying it's a bad film. But the same themes occurred in Toy Story 1 and 2.
On the other hand I found nothing as compelling in Toy Story 3 as, say, that scene with the mutant toys in the first film.

But little does he know,Toy Story 3is so besotted with brand names and product placement that it stops being about the innocent pleasures of immagination--the usefulness of toys--and celebrates consumerism!(with US economy heading South)

Me thinks Toy Story 3 is more serious than it seems and hardly seems serious at all,though at times has contemplations of mortality ,humann value and memory.