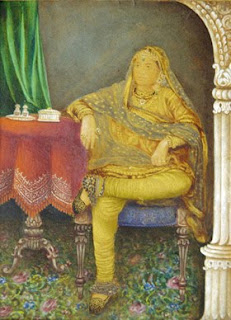 I caught Where Three Dreams Cross, a show of 150 years of sub-continental photography, in Winterthur, Switzerland, where it has traveled after opening at London’s Whitechapel Gallery. The curatorial argument is that this is India / Pakistan / Bangladesh as seen by locals rather than westerners, and therefore, implicitly, a more authentic portrait of the place.
I find the argument patently false. There’s a picture, for instance, of three poor women standing on an incline, taken by an Indian or Bangladeshi (I failed to make notes, will annotate the post after I get back to Bombay) in 2003 which could easily have been captured by an Orientalist Brit in 1903. Conversely, Henri Cartier-Bresson, for all the baneful influence he had on future generations of Indian photogs, crafted revelatory images of India.
The most obvious difference between Indian and European uses of photography is found in the painted photographs of the late nineteenth and early twentieth century. The decorative aesthetic of the subcontinent is on full view here, but to say that is to step into Orientalist clichés.
The trick, then, is to avoid statement, because any statement is a trap. The Indian photographer who did this best was Raghubir Singh. He used every cliché about India -- crowds, colours, ambassador cars, monsoon rains -- but his images evade all stereotypes. Part of the reason why he manages this is the way he deploys figures across the frame, so there isn’t one centre that can harden into statement or symbol. India has interesting intrinsic qualities that are also crucial to the imperialist discourse of difference / otherness / exoticism critiqued by post-colonial theory. The subject matter from which both are extracted is identical. It doesn’t matter if the photographer is Indian or European, as soon as his or her images become statements, they can be interpreted as ‘problematic’ arguments about the subcontinent. Raghubir Singh managed consistently to produce pictures that are fascinating artifacts without being manifest propositions.
The fact that his work (he's represented in the show by four or five images), while invariably well regarded, has been virtually ignored by post-colonial theorists indicates to me that these theorists don’t really desire what the curators of Three Dreams Cross want to highlight, namely a different way of seeing, so much as an opposed way of seeing, though such an approach is doomed to fall into the same pattern of clichés as that which it contests.
I have got a bit side-tracked from Three Dreams Cross, and might say more about the show itself later. What disappointed me most was that I’d seen pretty much every image in the past five years. The show is arranged thematically rather than chronologically of geographically, which was a wise decision. The themes are: Portrait, Performance, Family, Body Politic and Street. In Winterthur, the first three of these are contained in the museum’s main building. They’re probably the most interesting bits for Europeans, but I found these sections tedious. The show picked up in the annex, where The Body Politic and The Street reside.
A quibble about the title, derived from Eliot’s Ash Wednesday: the dreams of the three nations are never shown to cross during the course of the show. There’s good reason for that, of course, because when the dreams have crossed it hasn’t been in a convivial fashion, and the last thing the curators want is to focus on political conflict (that would be giving in to western media perception). If the dreams have been prevented from crossing, though, why put anything about intersections in the title?
Posted by Girish Shahane Girish Shahane at 11:33 AM

I'm curious what you are supposed to represent on this tour, Girish...

Most photography shows carry the burden of being crowded with too many images and one just then gets tired and longs to sit in a chair with a catalogue. A Lee Miller exhib at the V&A always stands out for being short, sharp and yet thorough.
So agree with you re views on Raghubir Singh.
I once saw an exhibition at Somerset house which purported to show art and architecture thro the last 4 decades and their influence on each other and suggested points of convergence.While the exhib was very good in material and display and showcased both disciplines handsomely, to me they just ran their parallel courses and I could not see the curators achieve their point.

Manish, thanks. Seana, we're a group of critics / curators, it's supposed to be our introduction to the Swiss art scene. I've been very impressed.
DS, I haven't read the catalogue yet, I wonder if there's some discussion about the 'crossing' bit...

Sorry, that's a bit cryptic, but I'm basically just posting so that I can follow this on my email. I guess I was wondering, under what auspices?

Looks like you are getting a priviliged darshan of all the museums and exhibitions. What a wonderful way to see it all.Enjoy it all and hope you've stopped sneezing.