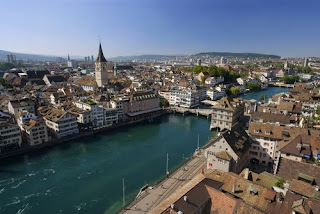 Zurich’s a far more interesting city than Geneva, the only Swiss town I’ve been to previously. It has steeply steepled churches and squares dominated by drinking water fountains emerging from carved stone pillars. There’s a lot of stone carving everywhere, sandstone, I think; seems to be a strong Swiss tradition. The typical plaque on buildings in the old town reads something like this: The original edifice dates from the 12th century, XYZ lived here between 1550 and 1580, the building was extensively modified in 1872, and has been on the heritage list since 1965. I suppose that’s the kind of history you get when you haven’t been at war for centuries.
The river around which the town is clumped is frighteningly clean: you can see the stones on the bed in water fifteen feet deep. Definitely fine for swimming, probably fine for drinking. I recall punting trips on the Cherwell at the end of which my entire arm, onto which a few drops splashed each time I raised the pole, would break out in a rash.
The weather’s been drippy, but the sun came out for five minutes while I was sitting outdoors in a café on Monday, and the trees took the opportunity to release a load of pollen into the air. Within an hour I was sniffing and sneezing and reaching for the anti-histamines. Luckily the stuff didn't turn me into a zombie for the day. I could pay attention to art around, and there was plenty that deserved careful attention.
I’m in Switzerland courtesy of Pro Helvetia, which has sponsored a week’s trip centred on Art Basel, the world’s most important art fair. I will blog about the fair when I have some free time, probably next week. Apart from two days spent in Basel, we're being taken to museums in Zurich, Glarus, Winterthur, Aaarau, Bern and Geneva. It's a packed schedule, but promises to be rewarding.
Posted by Girish Shahane Girish Shahane at 12:22 PM

If you have time visit James Joyce's grave in Zurich. Its in an attractive cemetery and easy to find. Just ask any of the heroin addicts who hang out there and they will direct you.