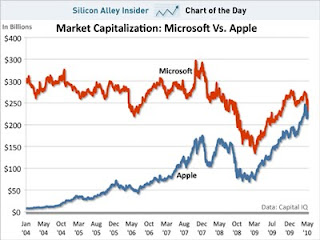 A little over two months ago, when Bill Gates was toppled from his perch as the world's richest man, I suggested he'd be more upset when Microsoft was dethroned as the most valuable tech company in the world by Apple or Google. At that time, Apple's market capitalisation was about 20% lower than Microsoft's and Google was a further 7 or 8 percent adrift.
The switch happened yesterday. Apple overtook Microsoft on a day when the share price of both companies fell, but Microsoft's fell further. At the trading session's close, Apple's cap was a little over 222 billion dollars, and that of Microsoft around 219 billion.
To put things in perspective, a little over a decade ago, when Steve Ballmer took over as CEO of Microsoft and Steve Jobs returned to Apple, Apple had a market cap of $16 billion to Microsoft's $556 billion.
The company Bill Gates founded has been going through some turmoil, with a number of senior management figures leaving the company, and it seems unlikely its share price will recover sharply in the near future. Google, meanwhile, is having a lot of success with its Android mobile phone system, which could propel it to the number 2 spot sometime in the next twelve months.
Posted by Girish Shahane Girish Shahane at 9:18 AM

The funny thing is that I used to hate Microsoft's conquer the world image, but as time goes on, Bill Gates only appears more solid and generous, while Steve Jobs, well, doesn't.

I agree. And the really disconcerting question is: does the metamorphosis of Bill Gates into a benevolent, thoughtful individual have something to do with his company's underperformance?

I'm not sure, because I can remember when all these guys were young and raking it in, and there was some complaint about how little they'd given back, but in retrospect, it might have been simply that they were young and still building their own fiefdoms and it was asking the wrong question of them for that stage of life. It's probably more important to ask it of them now.


I don't know if you've checked yet, but Adrian is talking about the idea of the underdog in America, and I put a mention of this over there already because I see a kind of linkage between the two discussions.

Also, it's mainly about sports and I think the subject could be expanded a bit, mainly because I have even less to say about sports than I do about corporate America.

There has been an article of an ex vice president of Microsoft on Nytimes few months ago highlighting why Microsoft was compromising on trying new ventures and he did predict this then.....Srikanth

Seana, I'd read the post, but saw the connection only after you pointed it out.
Srikanth, could you provide a link to that article? I'll do a search as well, but I'm not sure if I have enough information to locate the specific piece.

Not to steal your thunder Srikkanth, but this might be it.

Girish, as is often the case, the connection between them may be all in my mind.

I hope the Apple vs. Google competition gets fierce. We only stand to benefit from it...:)