Now that the bookstore chain Landmark's biggest Bombay branch has opened in Phoenix Mills, there's no need for me to visit any other shopping centre in the city. I checked out the stacks last evening, and was pleased with pretty much everything, except the fact that three art quarterlies were on sale, but not Art India, which features a lead article by me in its current issue, and whose office is walking distance from Phoenix.
Jabeen's sometimes disappointed that I always think of Phoenix when shopping is mentioned, complaining it has the same old stuff. My response is simple: seeing the same old stuff in the same old place is only to be expected, but seeing the same old stuff in a different place (which would be the outcome were I to visit any other mall) is depressing. 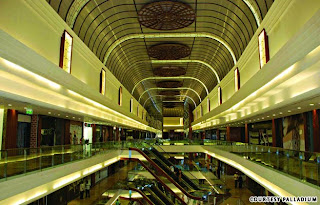 Landmark's located in the basement of Palladium, the new, high-end section of Phoenix. My regular stop in Palladium is Bespoke Cafe, run by the same management as The Tasting Room. The cafe, tucked away inside a men's fashion store called The Collective, offers a juicy beefburger topped with blue cheese that makes it easy to forgive the place its silly name. It also has coffees and wines on the menu. It's never full, for some reason, which means it'll probably close down soon, and I'll be deprived of the only good burger within a five kilometer radius of my home.
Palladium has some ridiculous stuff in it, like the Movenpick ice cream parlour handing out minuscule scoops (80 ml, I was informed) for 120 rupees plus VAT. Next door there's an Ed Hardy shop displaying minimal T-shirts with maximal patterns and even more maximal price tags (commonly 10,000 rupees, or 225 dollars, for one flimsy garment). If you like getting less for more, these are the places for you.
Posted by Girish Shahane Girish Shahane at 9:56 PM

Landmark seems to be witnessing a lot of these vanity enquiries. Spotted two authors in quick succession at the bookstore helpdesk enquiring about the availability of their own titles. While the first one- one half of a prolific duo was gentle in her questioning, the other one who wrote a well recieved, but an intellectually disnonest yarn roping in her music teacher and other music legends in the process was a little more pushy.

I made no enquiries, just looked. And you ought to be writing a gossip column :)
I pretty much know what book you're referring to about the music teacher; I didn't think the book was dishonest at all, and it's perfectly legitimate for an author to ask if her book is in store, particularly if it has won a major award or two, as this one has.

:):) I am clueless of what's being said above so Girish will question you in person.:)
Did not know of the existence of Bespoke Cafe, but situated as it is within a men's store, and a high end merchandise one at that, why would I?
But beefburgers are my daughter's current lust so will head there soon. Also heard Indigo Deli to be opening next week, so with Landmark (with or without books by certain authors) and I Deli opening, will head there tho like Jabeen I find the place a nightmare in it's warren-like development.Palladium was after all the car park!

DS, there's only been one book published about a music teacher in these past few years: Namita Devidayal's The Music Room. I'm presuming that's the 'intellectually dishonest' book being referred to. I liked the book quite a lot myself; and unless Anonymous can tell us why s/he believes it is intellectually dishonest, I won't change my opinion.

Why dont you ask them to carry it, or are you a shy retiring type?

Adrian, I did enough of that when I was editor.

So do we know if the Landmark space at the Palladium is now open? Their makeover seems to have an elephantine gestation.

On Movenpick, I cannot agree with you more..... someone ought to try them at a tribunal on crimes against humanity for overpricing. It's a different matter their green apple ice cream is to die for.

I've just returned from a visit to Phoenix, and it's still closed. In any case, books had begun to seem like an afterthought in the place by the end of its first run.