A reason to cheer? 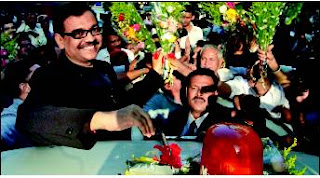 Today's Mumbai Mirror leads with a story about public prosecutor Ujjwal Nikam's driver being transferred after showing up in a suit instead of his uniform on the day Ajmal Kasab was sentenced to death.
Forget the driver for a second, here's my question: why are people offering bouquets to the prosecutor? As far as Kasab himself was concerned, I have never heard of a more open and shut case in my life. The guy was caught on CCTV cameras shooting at people, clicked by a news photographer up close, and seen by over a dozen people who lived to testify about his actions. Plus he was captured quite literally red-handed at the end of his trail of murder. It would have taken a feat of incompetence beyond even the capacity of our police force to botch that argument.
There were, however, two persons charged with laying the groundwork for the terror attack who were tried along with Kasab. Both these gentlemen, Fahim Ansari and Sabahuddin Ahmed, were acquitted by judge Tahaliyani, who made deeply critical remarks about the investigation.
The response to the performance of Nikam and the policemen who briefed him is akin to cheering our cricket team for its showing in the T20 World Cup. It's true we lost to Australia, West Indies and Sri Lanka, but we did beat Afghanistan.
Posted by Girish Shahane Girish Shahane at 10:30 AM

Thanks a lot, Girish. I'm sorry, I don't have a Twitter account, I'm afraid I'd get no time away from the Net if I started tweeting.

I more than agree with you. I hated the obscene show by the public prosecutor. In front of the TV camera’s he kept flashing some document with his name on top of it. I think it was his last argument or something.
I think his job as the public prosecutor is to get justice and not jump in joy for getting a prosecution or a death penalty. While I am not so sure on my views on death penalty, the song and dance which followed the judgement felt like a naked cannibal dance, in distaste.
Is his job to ensure conviction or to ensure justice?
What’s he got to answer about the two who were acquitted? Apologies to them as he implicated them falsely or sorry to the public that inept investigation got them off the hook?

Thanks, Jaimit, glad you concur. The matter is complicated by the David Headley investigation. Our media went completely overboard about Headley being given an easy time, even though he hasn't even been sentenced yet. The fact is that his involvement has been proven, and he faces a long term in prison.
The same TV channels that pointed fingers at the US and claimed the FBI had something to hide, have been curiously silent about Ansari and Ahmed. As you point out, we should either be angry about a case being concocted or for the letting off of terrorists. We don't know which, but the anger ought to be there, because either way somebody screwed up big time.

actually it came as a surprise that the other two were let off. didn't the prosecutors realize that their were gaps in their evidence?

I guess they were hoping the judge would not see through the evidence they fabricated. He more or less said the note found in a dead terrorist's pocket weeks after the incident had been manufactured by the cops.
If the police brazenly fake evidence in such a high profile case, you can imagine what they do when the media spotlight isn't shining on them.

i agree. it was strange to see how conviction and death penalty played out in the media. here are my experiences after covering the trial.

A Sad Citizen:
If anything, I still marvel at the incompetence of our judiciary system.
I still fail to understand why after being caught red-handed and all evidences against him, we spent incredible amount of tax-payers money and government time on this case.
Why do we still act like wussies in front of dick-headed Pak govt.?

This case is a clear cut invitation: Come !@$k us left-right-and-center, and don't worry if you get caught red-handed with an AK-47 in your hand, you will still get to enjoy govt. bureaucracy, red-tape, VIP treatment, Z-security, get unprecedented fame and media coverage so that you can encourage even more to follow the suite!
I really marvel at our incompetence!
Thanks for raising your voice, Girish!

Anonymous, the trial proved something important to the world. Without it, we'd have been in the company of states like China and Iran, which spend less money on trials, but provide very little justice through their justice system.
I find it depressing how many educated Indians do not appreciate the importance of assuming innocence till guilt is proven in court. And proving such a thing in court takes time and effort, even in open and shut cases.

In reply to Anonymous, I quote K. G. Kannabiran, one of India's most respected human rights lawyers. This is from a documentary I edited a couple of years ago. He's describing a case he argued before a judge in Andhra Pradesh:

This makes such complete sense to me. A fair trial says something about who we are.

Though it's sad that in India (perhaps in other Asian/African countries too), the police and judicial systems inspire so little confidence that citizens do end up thinking kangaroo justice is better than the due process of law.