Here's the text of my Yahoo! column without the minor editorial changes made before its publication. 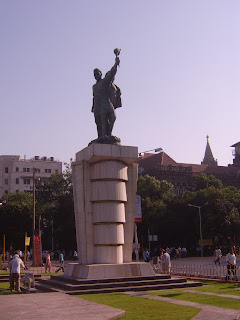 The bronze statue at the martyrs’ memorial in South Bombay stands on a peculiar, somewhat cone-shaped pedestal. Perhaps the designer’s intention was to mimic the form of a torch, with the pedestal as its handle and the statue as the flame. That’s the only explanation I’ve been able to dream up, having given the matter considerable thought.
The pedestal could be overlooked, if the sculpture itself made a powerful impact. The composition consists of a loin-cloth clad farmer fused to a kurta wearing city dweller. The two jointly hold a mashaal that resembles a fly whisk. While the farmer is comfortable in his pose, his partner looks distraught, perhaps because he is being nudged off balance and risks toppling from his perch. It must be particularly galling for him to be in that position because, after all, few loin-cloth wearing farmers lost their lives in the push for the creation of Maharashtra. It was people in urban areas who suffered, particularly citizens of Bombay which was the flashpoint of the five year long agitation. After first attempting to forge a bilingual entity, Jawaharlal Nehru proposed a three way division, in which Gujarat and Maharashtra would be fully fledged states while Bombay was ruled directly by the Centre. The Samyukta Maharashtra Samiti rejected this notion out of hand, and took to the streets in protest.
Those protests have now largely passed from history into legend. The myth has grown that peaceful demonstrators came out on the streets in January 1956, and were shot in cold blood by police under the orders of Morarji Desai. In some accounts, the firing takes place in 1960, although Desai had moved to the Central government by then. We read versions of this tale in commemorative supplements from newspapers:
“Hutatma Chowk: a sculpture set up in memory of the 105 deaths that occurred in 1960 when a peaceful demonstration by the Samyukta Maharashtra Samiti (United Maharashtra Committee) was fired upon by the police.”
In blogs:
“During one peaceful protest in 1956, under the auspices of Morarji Desai’s Congress government in Bombay state, police opened fire and killed 105 people.”
In encyclopedias:
“In January 1956, demonstrators were fired upon by the police at Flora Fountain in the capital city of Mumbai. Flora Fountain was subsequently renamed Hutatma Chowk or "Martyr's Crossroads" in their memory. It is estimated that in all, 105 people were shot by security forces. Morarji Desai, who was the then chief minister of Bombay state was later removed and replaced by YB Chawan as a result of criticism related to this incident.”
And on NGO websites:
“In January that year, police fired upon participants of a peaceful demonstration at Flora Fountain. 105 people died in the firing. Flora Fountain was subsequently renamed Hutatma Chowk and a memorial was built in their memory.”

An alternative myth, which has the advantage of being amusing, is found in Salman Rushdie’s Midnight’s Children. The young Saleem Sinai, trying to impress a girl with his bicycle-riding skill, hurtles into a Samyukta Maharashtra Samiti procession. After being jeered for his evident affluence, he’s prompted to speak in Gujarati, at which point he says the only words he knows in that language: Su che? Saaru che. Danda leke maaru che; translated as: How are you? I am well. I’ll take a stick and thrash you to hell! The rhyme becomes a war chant for the Marathi marchers, who surge forward, encounter a counter-procession of Gujaratis, and lay into them, sparking language riots which lead ultimately to the creation of Maharashtra and Gujarat.
In truth, Saleem Sinai was not a cause of the foundation of Maharashtra, but neither was a massacre of unarmed, peaceful demonstrators. Hutatma Chowk has 106 names etched on a slab some distance from the bronze statue; it is clear from the inscription that they died on different occasions and at different places. A number of the names are not Marathi: there’s a Patel, a Cursetjee, and a Singh among others. The strongest argument against the martyr myth, however, concerns not the time or place or mother tongue of the dead, but the manner of their protest. A Time magazine report dated January 30, 1956, describes the peaceful activists thus:
“The rioters blocked streets with boulders and gasoline drums, tore up lampposts, ripped down fences. They smashed statues of Mahatma Gandhi (a Gujarati himself), burned Desai in effigy, flourished pictures of Nehru hung with old shoes as a gesture of despisal. Mobs, sometimes 10,000 strong, stormed police stations, looted Gujarati shops, flung electric light bulbs filled with nitric acid in the faces of police and passersby. Saboteurs derailed trains, hurled stones at buses, set fire to cars.” In this context, the torch held by the two bronze figures at Hutatma Chowk acquires a very different meaning.
It wasn’t just riots that changed Nehru’s mind about keeping Bombay separate from Maharashtra. The losses the Congress suffered in the 1957 elections played a crucial role. The coalition opposed to the Congress was composed mainly of Leftist politicians. Socialists and communists like S M Joshi, S A Dange and Lalji Pendse viewed the language divide between Marathis and Gujaratis as a mirror of the division between proletariat and bourgeoisie, and ignored the warnings of Nehru who believed their agitation would encourage linguistic chauvinism. May 1, Labour Day, was chosen as the date Maharashtra would be born because of the Left’s conviction that the inclusion of Bombay in the state represented a victory of the working class. They soon learned how wrong they were. After 1960, demands began to be made for Marathi quotas in the public and private sector. The Shiv Sena, created in 1966, drove a wedge in the workers’ movement by pandering to the frustrations of bhumiputras. Within ten years of the formation of Maharashtra, the Left had been sidelined in Bombay trades unions and state party politics.
There are many reasons to celebrate the fiftieth anniversary of Maharashtra’s birth. In the broader context, the division of states along linguistic lines did not produce the worst results imagined by the idea’s detractors. If anything, as Ramachandra Guha convincingly argues in his book India After Gandhi, it helped quiet secessionist rumblings. It remains the case, however, that not only does the Hutatma Chowk martyrs’ torch carry two significations, of liberty and destruction, but the nature of Maharashtra’s genesis has made it impossible to separate one from the other.
Posted by Girish Shahane Girish Shahane at 12:45 PM

Congratulations on the new column Girish, looks like a good gig.

Its amazing how good Ramachandra Guha's book is. Do you know other books that talk about India post independence that are also good reads ?

No, most are driven by analysis rather than narrative.