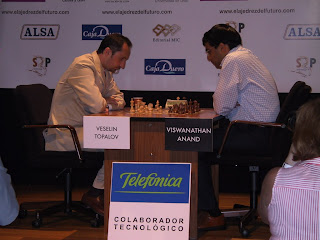 It wasn't a beautiful match, the just-concluded World Championship between the reigning champion Viswanathan Anand and his Bulgarian challenger Veselin Topalov. I suspect only one of the twelve games, Game 4, which Vishy won with the white pieces, will be remembered as a classic. That game was the kind professionals dream about, where the opponent makes no obvious blunders but nevertheless finds himself down a point at the end.
Despite the relative paucity of classical elegance, this is probably Anand's greatest win because the match was an ordeal, a test of mental strength and, at the end of it, Anand stands like one of those epic heroes who triumphs over everything thrown at him, not without luck, not without having vulnerabilities exposed, but having demonstrated an inspiring combination of courage, will power, grit and ability.
The first reason the match qualified as an ordeal was that Topalov committed himself to the so-called Sofia rules, which meant no light draws were offered, play continued till the position was completely dead. Instead of getting the occasional easy day, where after 25 moves both players say, "this position is more or less equal, let's not bother trying to find a win", Anand had to play endgame after endgame precisely. One slightly inexact move at that level can turn a draw into a loss. In the end it turned out that the challenger was as mentally drained by his self-imposed commitment as the champion.
Secondly, Anand was delayed getting to Sofia because of the Icelandic volcano. He had a 40 hour road trip to cope with, and asked for a three day postponement, but was given only a day's extra time. He lost the first game, possibly because he was still suffering the effects of his journey. Being down a point in a twelve game match is serious; it means that, in eleven games, you have to win two more than your opponent.
The match swung Vishy's way by Game 5, after he won his first two games with white. He then had an opportunity to virtually seal a victory in games 6 and 7, in both of which he had white pieces. A win in one of those would have put the match beyond Topalov's reach, but the challenger played magnificently and almost defeated the champ playing black. Then Anand made a huge mistake and allowed Topalov to equalise the score. At this point the momentum had swung entirely to Topalov, and I felt Anand might not have any reserve of energy within him. Instead, it was the challenger who seemed to succumb to exhaustion in the final games. Playing white in Game 12, with the scores equal, he made a massive error and let Anand take the match without the necessity of a tie-breaker. Later he claimed that he was superstitious about playing the tie-break on May 13, and therefore wanted to finish it off in game 12 itself.
If that's true, Anand should be happy he got only a day's postponement and not the three he'd asked for.
Posted by Girish Shahane Girish Shahane at 6:39 PM

Not easy at 41 years of age at all. A true champion!

True Champ!! Thought Indians would be the most superstitious!! Turns out Bulgarians too are..