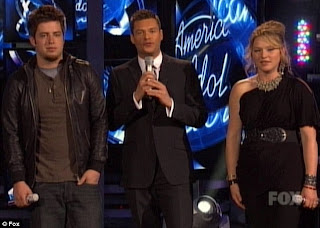 The finale of this American Idol season was a turkey. I supported Lee DeWyze through the series, though not with any great enthusiasm. His performance in the final episode, though, lost him my vote. His opponent Crystal Bowersox was hardly better; after all, screaming in tune is still screaming.
The worst moment of the evening was Lee sleepwalking through U2's Beautiful Day (in case the video has been taken down, just type in the relevant terms and YouTube will offer an alternative). If you want to hear how that song should be sung, try this version by a Norwegian named Kurt Nilsen, who beat out favourite Kelly Clarkson to win the inaugural (and only) World Idol title.
And here, for reference, is the original studio recording and music video.
Posted by Girish Shahane Girish Shahane at 9:10 AM