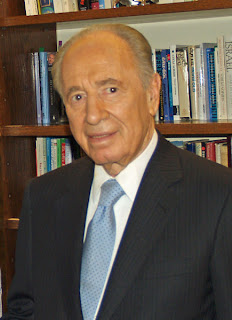 The Israeli President Shimon Peres is a wise and intelligent man, as this interview with the Wall Street Journal published yesterday bears out. It also bears out the US media's lapdog approach to Israel, which I have written about before. What kind of interview opens with the question, "Where should we begin?" and then allows the interviewee to set the agenda with a long historical disquisition?
Not a single difficult question is directed at Peres by WSJ staffers through a conversation that must have lasted at least an hour. He is free to display his breadth of learning and play the role of elder statesman.
One issue, in particular, is never raised by anybody in the American media when interviewing Israeli politicians: the nuclear arms the nation possesses, but has never admitted to owning. Back in the 1960s, the United States took Israel at its word that that its nuclear programme was entirely peaceful. The Americans later learned they had been deceived. The brains behind the secret weaponisation operation was Shimon Peres.
It has now emerged that, in 1975, Shimon Peres offered advanced missiles equipped with nuclear bombs to South Africa's P W Botha. So much for Israel's contention that it is a responsible power that would never assist proliferation. Although the sale didn't go through because the South Africans felt the cost was too high, a lot of nuclear tech and material was exchanged between the two nations, and appears to have contributed substantially to the apartheid regime's eventual development of atomic weapons. A letter to South Africa's Minister of Information, written by Shimon Peres in 1974 when he was Defence Minister and now declassified, speaks of how the two nations share, "a common hatred of injustice". I can see that.
The Guardian broke the story about the Israel-SA nuclear connection ten hours before the composition of this blog post. A Google News search shows it was picked up by Ha'aretz five hours ago, and by the Jerusalem Post 2 hours ago.
How many US papers have reported the story so far? Zero.
They'll have to carry it eventually, of course. But their reluctance to do so is evident from the delay.

UPDATE: It is now 17 hours since the Guardian article appeared on the Web. Much of the British press has picked up the story; Arab outlets like Al Jazeera and Al Arabiya have, naturally, done the same. A denial's been issues by Israel, hardly surprising. The denial's been put out by AP and Reuters.
Still no US coverage. Zip, zero, zilch.
Posted by Girish Shahane Girish Shahane at 9:48 AM

This post reminds me of articles written by a columnist named Eric S. Margolis.