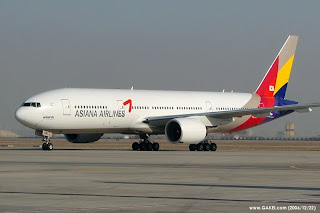 Skytrax just published its annual list of the world's best airlines, and Asia dominates it. In fact, the top 10 airlines are all based in Asia / Oceania. The Americas, Europe and Africa were blanked. Since Skytrax is headquartered in the United Kingdom, I can't ascribe any regional bias to the selection, which is computed after a large customer response survey.
These are the top 10 in the Airline of the Year race for 2009-2010:
1. Asiana Airlines
2. Singapore Airlines
3. Qatar Airways
4. Cathay Pacific
5. Air New Zealand
6. Etihad Airways
7. Qantas Airways
8. Emirates
9. Thai Airways
10. Malaysia Airlines

Asiana Airlines, by the way, is Korean.

I can understand why American airlines didn't figure, their service standards have always been among the lowest in the world, but the banishment of Europe is a bit surprising. I wouldn't expect British Airways or Air France to make the grade, but Lufthansa and Virgin Atlantic should have been in with a shot.
Kingfisher Airlines won for best Indian carrier, and Indigo for best Indian low-cost carrier. The first doesn't impress me too much: if a company is prepared to lose thousands of crores of rupees, it can easily offer great service. The trick is to do that while also making a profit despite tough competition. That's what Indigo's been doing year after year. On short flights I pick Indigo over full-cost carriers even when cost isn't a factor. I don't care overmuch if I'm not fed in the course of an hour long journey. What I want is a comfortable flight which gets me to my destination on time. Indigo's clean, new planes and punctuality haven't let me down so far.
Posted by Girish Shahane Girish Shahane at 10:22 AM

The best thing about your blog....is that its more informative than the normal newspaper I read everday! I'm sorry if I cannot contribute to your posts through discussions...but its a joy to read each one of them!